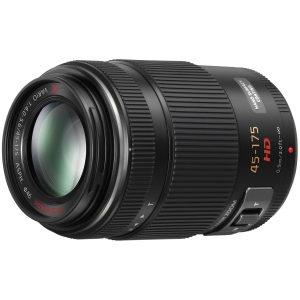 The undeniable strength of this lens is in its physical dimensions. It's about the same size as I remember my Leica 90mm Summicron as being. Maybe a bit fatter. It has a satin black plastic finish on the barrel and you'll find two rings on the body - a rather thick one closer to the mount for zooming and a thinner one at the lens opening for manual focus.

The finish is typical of kit lenses these days, and I suppose in the light of the somewhat exquisitely made new m43 lenses from Olympus it's a bit of a let down in the build quality department. The mount is steel and the lens hood is a circular bayonet type made of plastic.

I like the way it feels. The power zoom works really well and like the camcorders of old you can control the speed of the zoom based on the amount of pressure you apply to the W-T lever. Zooming by wire with the zoom ring feels OK, but there isn't that same tactile response you get from a traditional zoom lens.

Manually focusing this lens will test your patience. Not because it is focus by wire, but because the throw is so long. It takes a good couple of turns to bring a midfield object into focus if you are at either extreme of the focus range. But then the autofocus performance on both my OM-D and GF-1 is blisteringly quick, so that's never going to be a consideration for me.

The lens hood reverses onto the body for storage which is most welcome, given Panasonic and Olympus' proclivity to provide square hoods on some other recent m43 lenses.


Performance In the Field

It doesn't cost all that much and I am pretty sure that a lot of m43 users who are looking to shed the weight of zoom lenses that offer a similar range on bigger cameras (including some of the options on m43) will be very happy with 210g and just under 10cm in their camera bags. Travellers will be thrilled with this option.

The trouble with this lens is that it's not as sharp as I am used to seeing on even consumer zoom lenses. That's not to say that it's soft, it isn't, but it just seems to be lacking that bite I've seen on lenses like the Nikon 70-300mm VR. There's also the fact that very shallow depth of field is not a hallmark of the m43 system, so if you're stopping this lens down to f/8 when shooting it at full zoom, you're not going to get the kind of subject / background separation that you may be more accustomed to with (say) faster lenses on the 35mm system.

You could work around this by choosing your background a little more carefully, although this is not always something you can do, depending on the shooting situation. I got this lioness one morning on safari last year and luckily she was lying on top of an earth mound with a clear background. In some of the other examples here I wasn't as lucky and you can see how the depth of field tends to prevent you from getting that desirable separation.

So, if you are looking to get shallower d.o.f. you really shouldn't consider this lens as an option. My feeling is that Panasonic didn't produce it so much for use in stills as they did for use in video. Not being a video person I am not really in a position to offer much comment on its usefulness there.

That being said, I still think you are going to have a very hard time ignoring the usefulness of such a small form factor in a telephoto zoom lens. It's what sold me on it.

You can see through it and it can focus on objects both close and far. There's nothing optically wrong with it that can't be fixed in post production. See, I told you we don't do science on fotozones.com when it comes to reviews. We do reality. And pictures.

If you are using this lens on an Olympus OM-D you're going to have to switch off the IBIS system because the lens does not have a switch that allows you to turn its own OS off. I don't know why Panasonic would have omitted this from this lens since they have such a switch on just about every other OIS lens they make. I recall also that I had to update the firmware in the GF-1 to deal with this because previously there was no way to switch it off with that body. Now you have to go into the menu system to turn it off.

While it is said that you shouldn't run both the IBIS and an optical stabilisation system at the same time, I have done this in the past and can't report any noticeable problems.

As a travel lens it is a very good option when combined with a shorter kit lens like the Panasonic or Olympus 14-42mm. You'll get decent image quality and a light bag, the value of which when travelling great distances cannot really be over-emphasized.

I'm not going to haul it out to do portraits or anything serious, but I am going to keep it in my m43 kit bag for those times when all I want is a candid snapshot of something off in the distance.