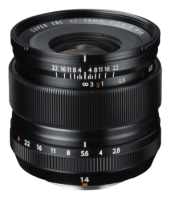 For my first six months in Fujiland, this lens and the modest XE-1 camera were all the Fuji I had. It's auto focus and manual focus, and has a distance scale and an aperture ring. It gives the impression---without having technically measured it---of extremely even sharpness all the way across the frame.

It's most startling imaging characteristic is the absence of distortion.  It actually has a tiny amount of barrel distortion, but there is so little distortion that it doesn't need to be digitally corrected, even on formal architectural shots. I feel comfortable using this lens at any aperture.  I know the lens will not fail in some way, and spoil the shot. This is the APS-C answer to the much sought after Leica Super Angulon 21mm/2.8, except the evenness of illumination is better.

Cons:  Focus by wire, aperture by wire, most samples seem to have rather faint detents on the aperture ring.

Durability and serviceability: unknown...this Fuji X equipment hasn't been around long enough to know. Mine is still working fine after 2.5 years and thousands of frames exposed.

The flange-focus distance is so short (17.7mm) that, when combined with the focus/aperture by wire system, it is unlikely that the Fujifilm X lenses will ever be usable on another camera system.

Hint:  If the supplied petal-shaped hood, which is very well designed for shading the lens, is too large for your taste, buy a second hood from Fujifilm, and trim it down with a Dremel or a saw.

I absolutely recommend this lens to any Fuji X shooter.