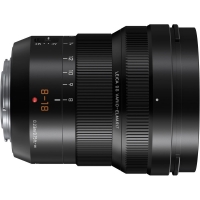 It’s almost like I could hear it’s heart beating from miles away. A slow, steady rhythm drawing me closer and closer. It wanted to seduce me with its svelte outline and cool, irresistible metallic finish.

I had no idea it was there, but something inside me (or maybe outside of me) was being pulled towards the electronics goods shop, where a few years ago I had purchased not just one, but three Panasonic Micro Four Thirds lenses for my new little camera system. It must have been a sixth sense of sorts drawing me there this past Saturday.

I walked into the shop specifically to ask a question about whether the proprietors were going to be getting the new range of Panasonic MFT lenses in, seeing as Panasonic has decided to start redistributing their photography products in South Africa again and this particular shop has traditionally always carried their stuff. I was particularly interested in the new Leica designed 8-18mm f/2.8-4.0 ultra wide angle lens. With the increase in the amount of real estate photography I am doing, it would be nice to have a top end lens to do this sort of work instead of the mid level one I have been using. It’s a confidence thing, you know.

Bootie manages the Pavilion branch of Govan Mani (the shop I was in) and he was busy checking his computer for a Panasonic price list when I looked up at the glass cabinet behind him and almost swallowed my tongue on the spot. There on the top shelf were four brand new Panasonic lenses and one of them was the very one I was asking about! Providence for me to enter the store and make such a discovery? More like The Last Temptation Of Dallas, a man crippled with financially debilitating photographic GAS for almost 20 years!

The moment I held this 8-18mm lens in my hands the first thing that flashed through my mind was that in spite of its chunky, metal appearance, it was actually very light. It looks way heavier than it feels. The metallic finish is exquisite and very Leica-like. The zoom ring turns as smoothly as pate spreads across a canapé. When you touch the finish there’s no tell-tale sign of finger prints left behind at all. I knew then that resistance of such allure was going to be nigh impossible. Oh Lord. What have I done by coming in here, I thought as I immediately contemplated extended overdrafts and accessing whatever equity I might have in the studio equipment I no longer use and might be able to sell to make up the rather large number required to acquire this beautiful lens?

Unfortunately (or fortunately, if you view the situation from a slightly different perspective), the Panasonic camera they had in the store didn’t have a charged battery in it, so I wan’t able to see the lens in action. Bootie invited me to bring my own camera in any time to conduct an examination of this lens’ charms on a working camera. It’s an invitation that has been disturbing my sleep patterns since Saturday.

There’s nothing wrong with the Olympus 9-18mm that I have been very happy with since I got it in 2012, but you know us photographers, if there is something even remotely better than what we have, well… the GAS becomes irrepressible. And I have been feeling it building up since the weekend. Something’s got to give!

But why do we lust after these things the way we do? Do we somehow believe that by possessing them we will be magically endowed with better photography skills? Experience of my own splurges into gear I couldn’t afford, as well as years spent observing the photos of those who can afford it, seems to suggest that the answer is an obvious no. It certainly doesn’t improve your photography much at all. So why do we do it? Why do we crave upgrades and why do we spend so much time obsessing over the gear we think we absolutely can’t live without?

I don’t really know. I wish I did but I don’t. There’s possibly a psychiatrist or two out there who does know the answer but they will likely charge me more than the cost of the gear I lust after to provide an answer, so logically speaking… I suppose it will be cheaper to succumb to the GAS than getting therapy for it.

Anyway, getting back to the lens in question;

From what I have read online by a variety of reviewers (some of whom are actually photographers), the Panasonic/Leica 8-18mm lens is very good, but it also suffers from the same problem that most ultra-wide angle lenses do, namely flare when pointed in the direction of a bright light source. If there is one thing that prevented me from buying the Olympus 7-14mm f/2.8 PRO that was it. The flare was something that would cause me a problem in most shooting situations and if you know how much I hate editing photos, you’ll know that anything that causes me to do more editing than is ordinarily required is going to be frowned upon.

The 8-18mm apparently has better flare resistance than most other wide angle lenses because of the “nano coating” that it has on the elements. Sounds like snake oil, doesn’t it? That said, if there is any truth to the matter, then the lens becomes something that will actually improve my photography if I don’t have to worry about losing contrast in photos where I have a broad range of brightness in the scene (i.e. real estate interiors) and there are fewer element ghosts to worry about cloning out. The 9-18mm Olympus I have doesn’t do too poorly in this situation, actually it does a lot better than the supposedly superior 7-14mm PRO lens does where flare is concerned, but where it falls short of gaining the all important Fotozones Stamp Of Outright Approval (10/10 in any review I do) is its handling of barrel distortion at 9mm. And I suppose it could be a tiny bit sharper too. It certainly isn’t soft though, don’t get me wrong. Far from it.

This is a developing story. Stay close to find out if I am able to resist the GAS or succumb to it! Did I mention that they also have the 45mm 1.2 Nocticron sitting right next to the 8-18mm? Let's not even go there...