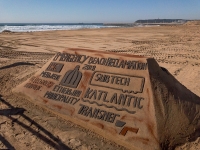 Last week I was pretty busy with photographing Real Estate listings. I think I ended up doing 8 for the week. Some were great, some were just awful, so I am thinking of changing my official title from “Property Photographer” to “Turd Polisher”, because that is a very appropriate description of what I am doing when editing some of my work.

Anyway, today I didn’t have anything on, so to get out of the house for a little while I took a drive down to the beachfront. For those of you who don’t know, May is the very best time of the year to visit Durban. The weather is quite stunning nearly every day. The sky is blue, there is never any wind and the ambient temperature averages about 23-25˚C. Usually this time of year we see lots of people heading to the beaches to enjoy the warm Indian Ocean water and this magnificent weather. However, this year there is a problem. Some of the main central beaches are closed while the city tries valiantly to replenish the fast eroding sand.

Due to it’s position at the mouth of several rivers, large portions of the city are essentially reclaimed land and in the current age of global warming we are seeing some unusually high spring tides on a more frequent basis than has been the case historically. These events wreak havoc on the promenade as the ocean tries to reclaim its dominance over the shoreline. 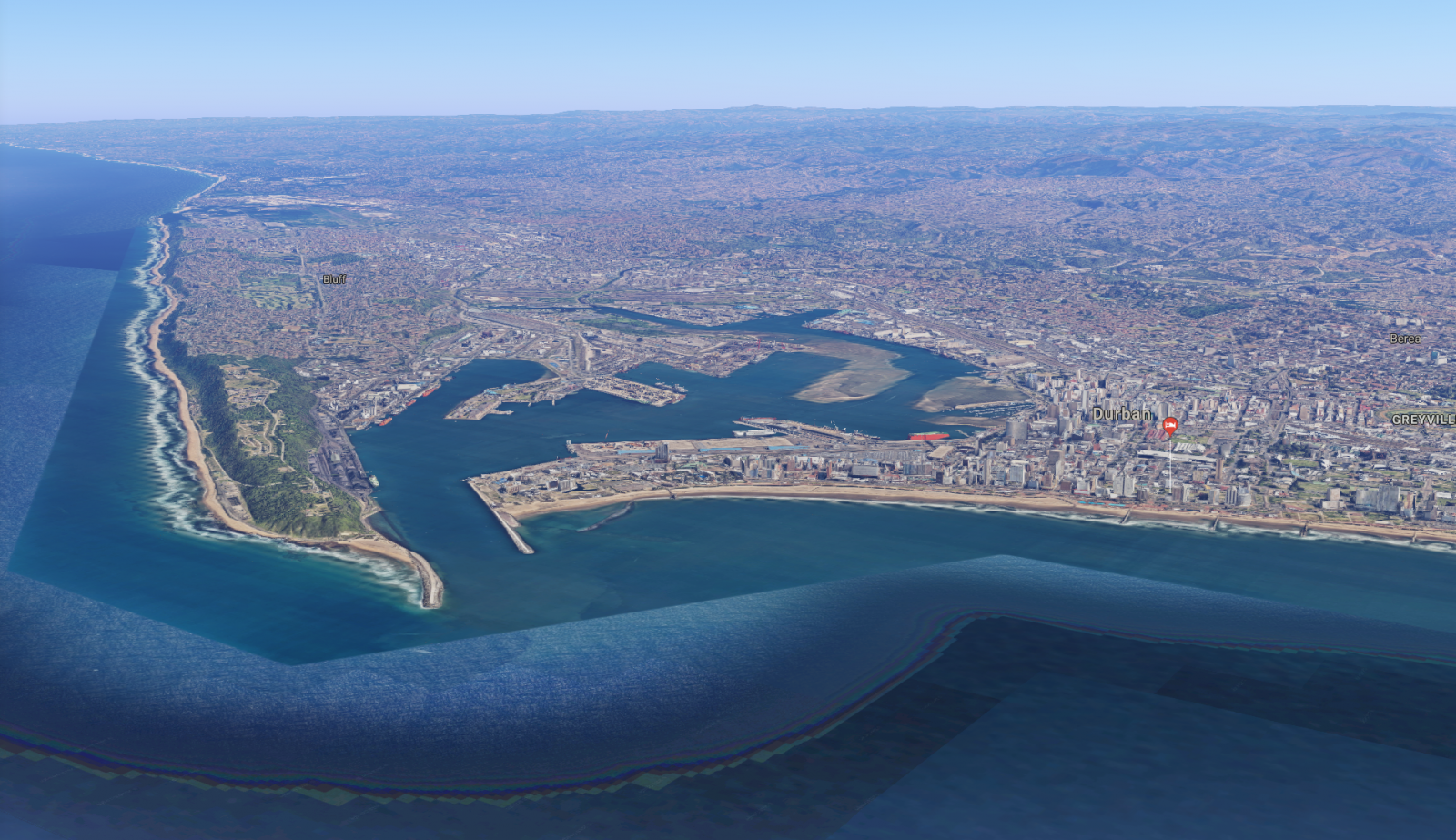 Google Earth 3D view of the city, looking south west. The harbour mouth was once an estuary and the entire point area is actually a giant sandbar. On the horizon you can see the Drakensberg mountains.

Since I’ve been alive and living here (50 years now), it’s been an ongoing battle. Sometime in the early 1980’s the city engaged the services of an overseas company who came up with the brilliant idea of taking the sand normally dredged from the harbor mouth and pumping it onto the beaches with water via massive 2m diameter pipes. As kids we watched this operation unfold with fascination and were astonished to see the beach grow from it’s usual width of (roughly) 50-100m to more than triple that in places. It was a huge success and the city then built its own, somewhat smaller, but permanent sand pumping system to maintain the shoreline.

Sadly, as with most infrastructural systems that had been put in place by the previous regime, it fell into disrepair after the transition to democracy and only the southernmost central beaches were having their sand replenished a few times a year, while the more central and northern beaches were literally disappearing from the coastal scour that affects them. This year it reached crisis point and finally lit a fire under the new city management’s collective behinds to take emergency action. 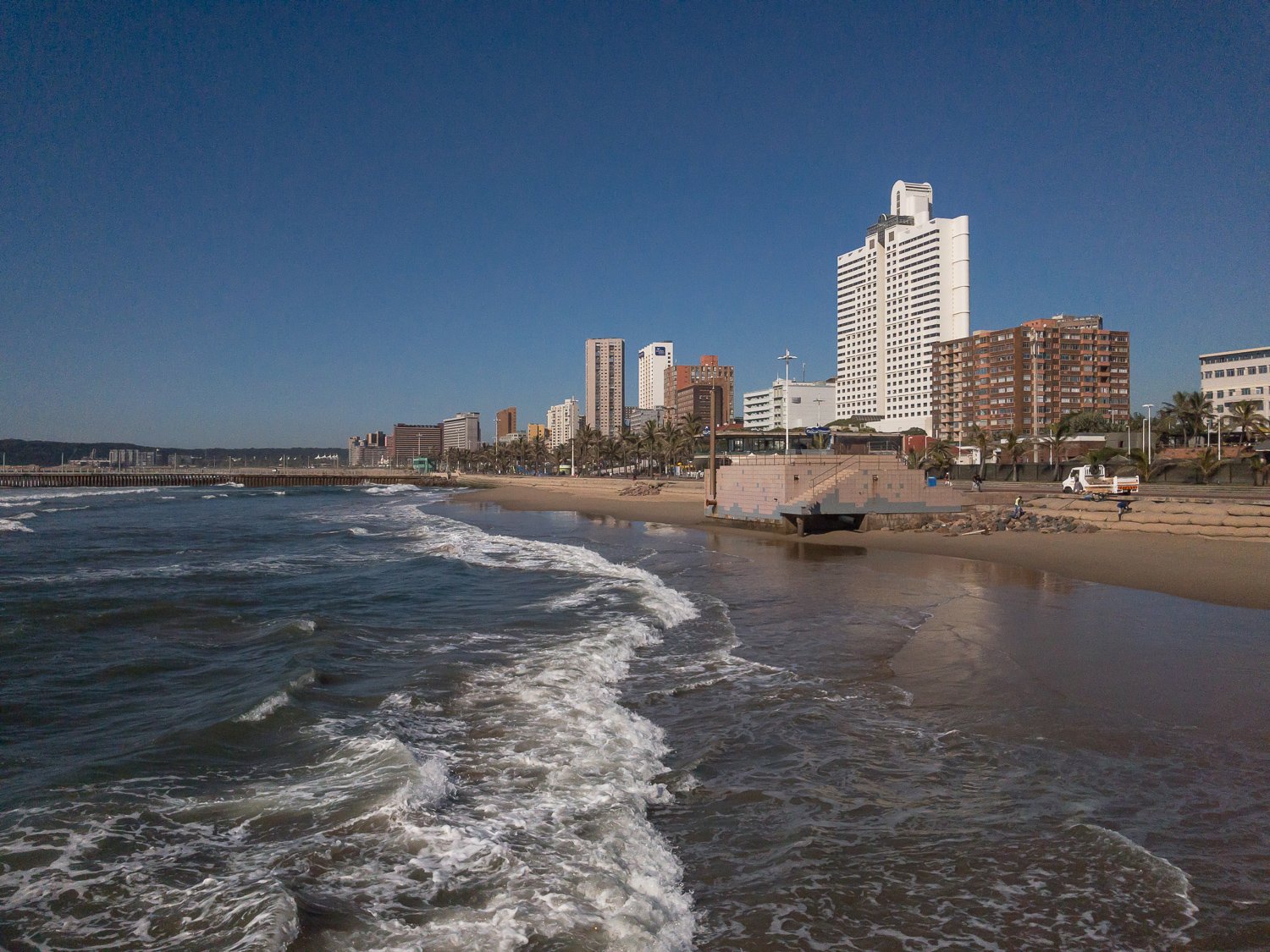 The structure you see being eroded was actually once a pump house for the original reclamation scheme. Ironic that it is now becoming a casualty of the thing it was designed to protect us from.

On my walk this morning I see that they are doing it slightly differently this time around. Instead of pumping it from the harbor mouth and spraying it towards the ocean, the sand appears to be getting pumped from a point about 300m from the shore directly onto the beach into huge mounds which are then being bulldozed flat. Honestly, I don’t think this is going to work very well and it certainly doesn’t make much sense from an economic point of view to have these big diggers and dozers running all day, taking sand from where it is being deposited and manually moving it across the beach when all they have to do is point the outlet towards the sea, pump the sand in that direction and just leave it there. That’s how they did it in the 80’s and it worked perfectly for a long time. 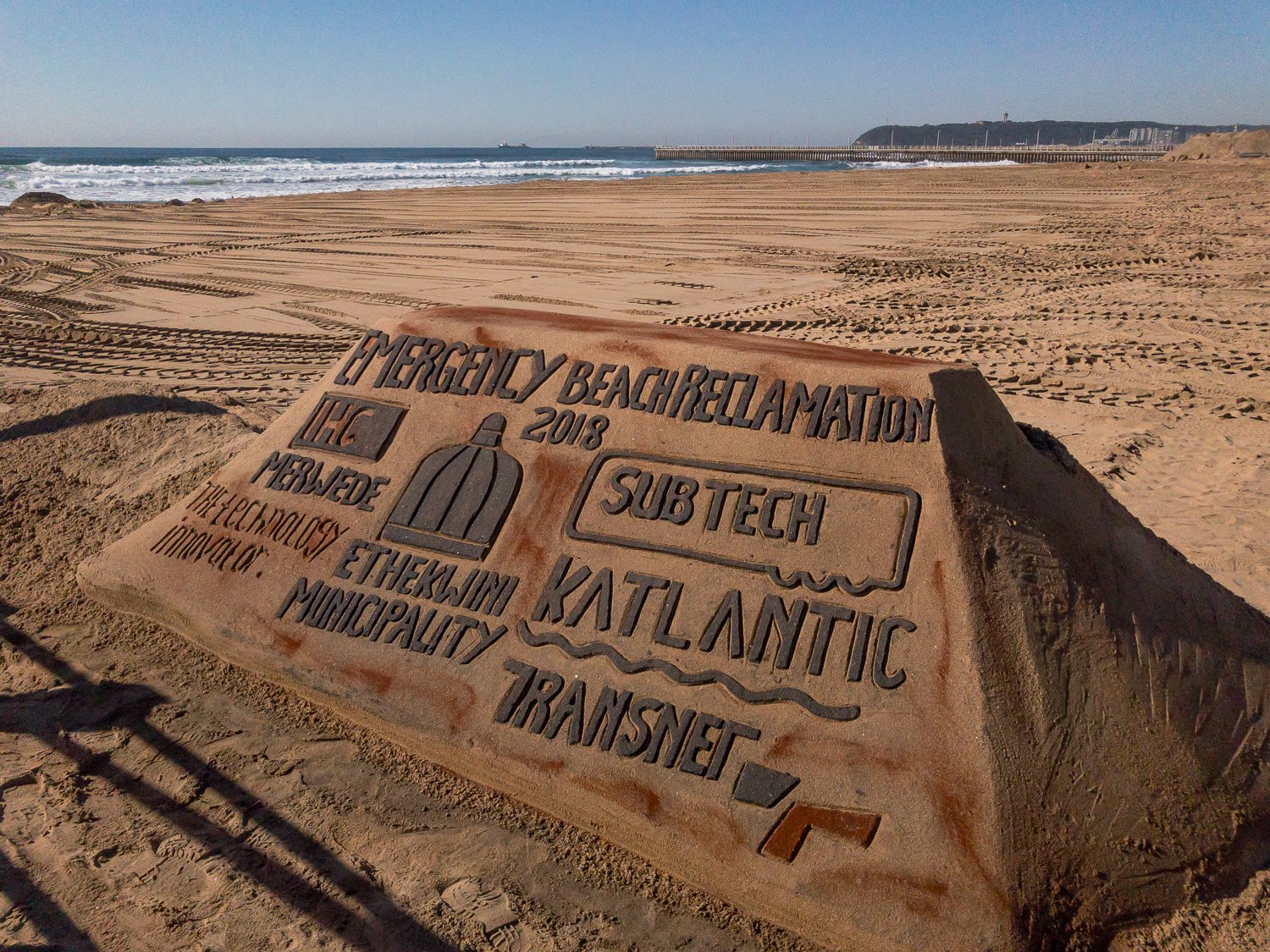 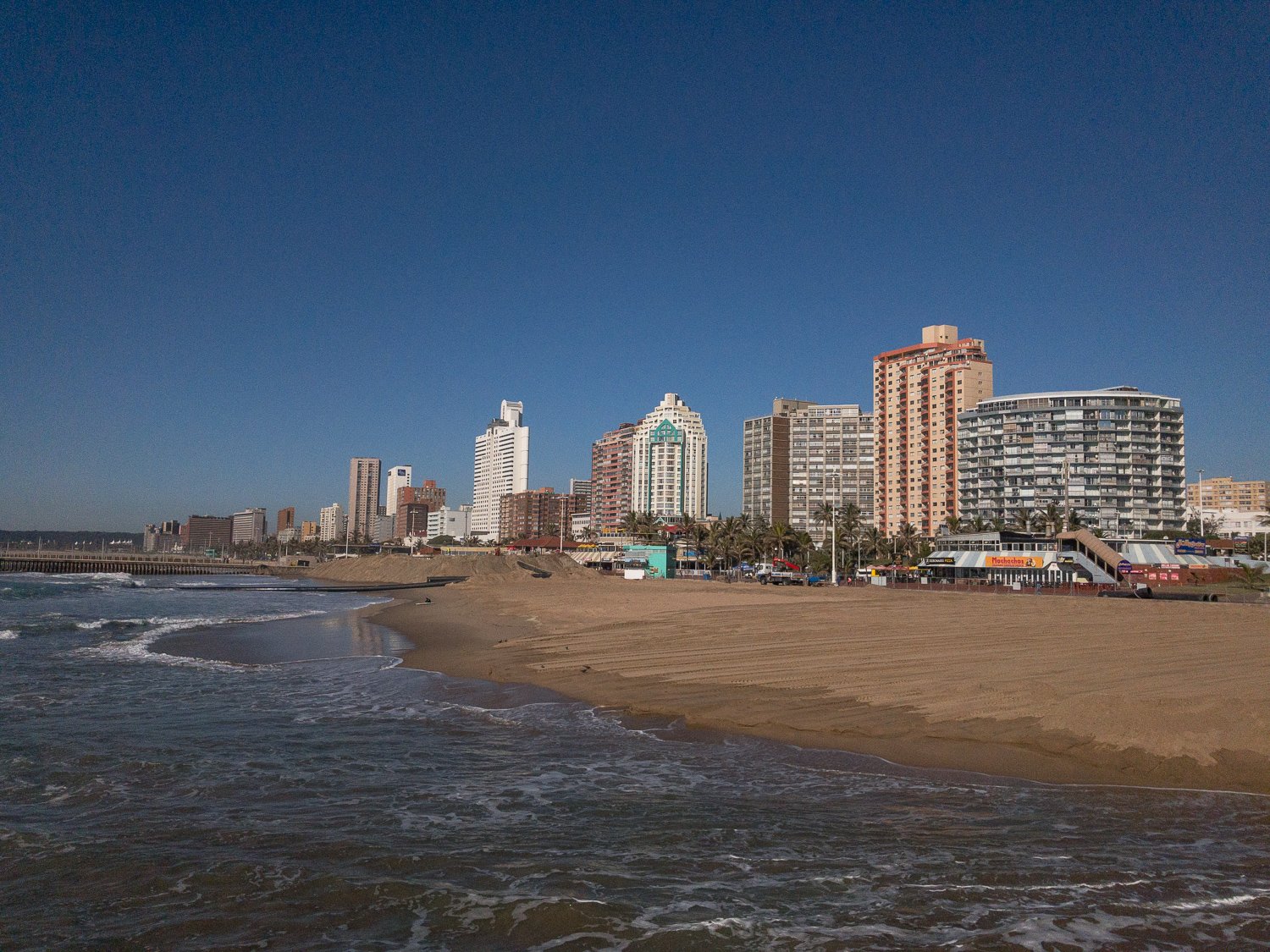 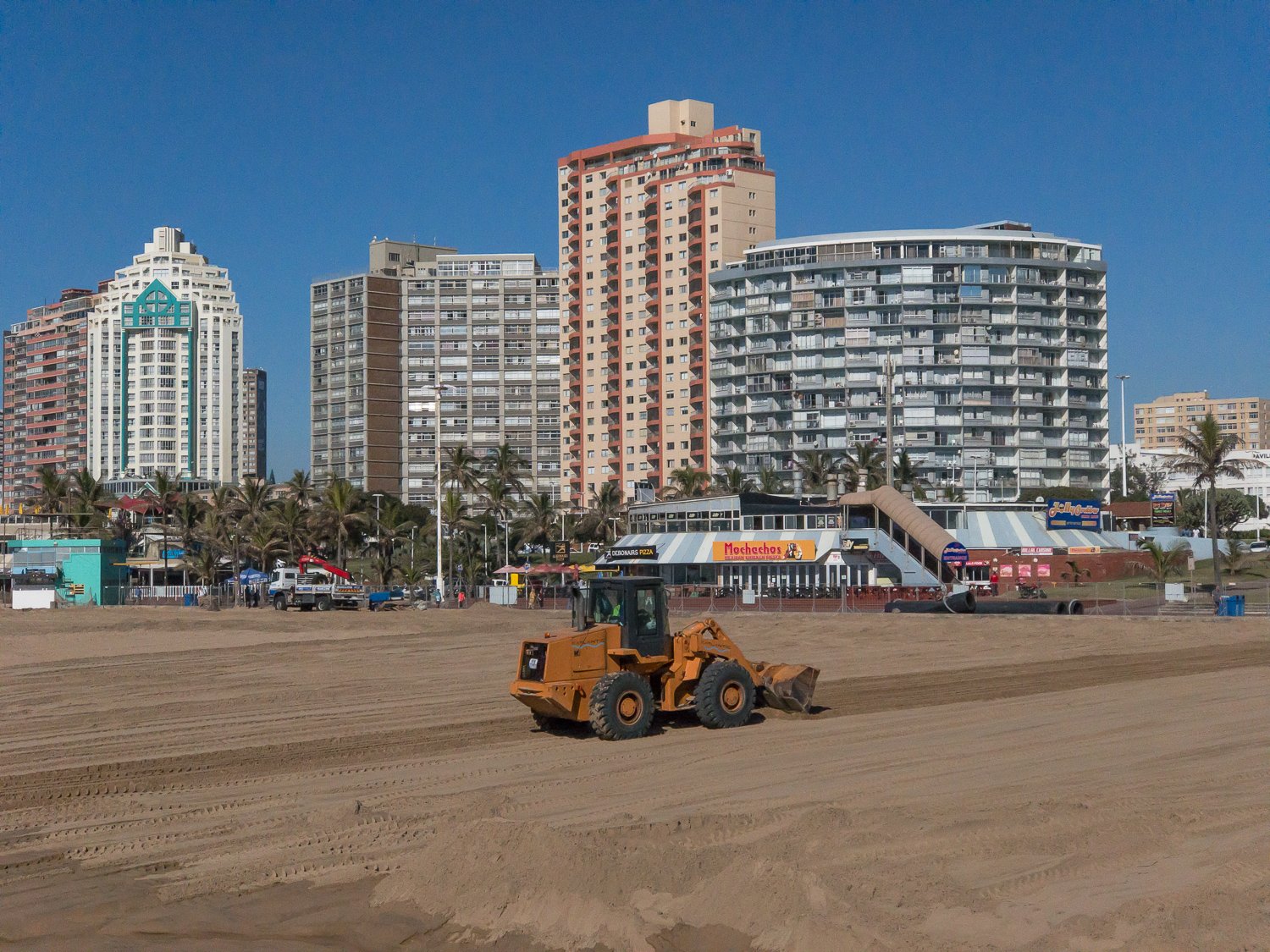 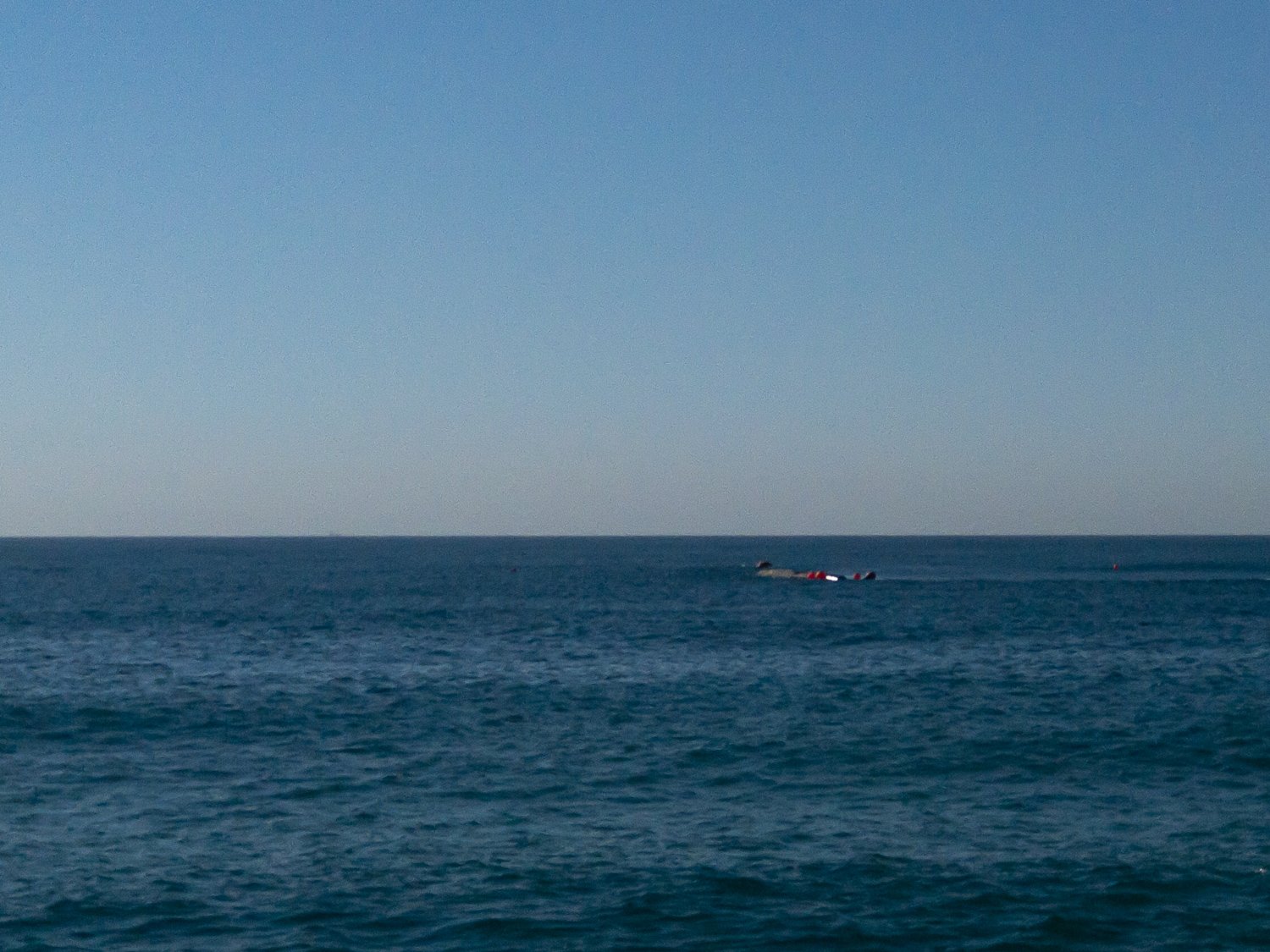 Not a great pic, but this is the floating connection point for where the dredger drops off the sand to be pumped onto the main beach. 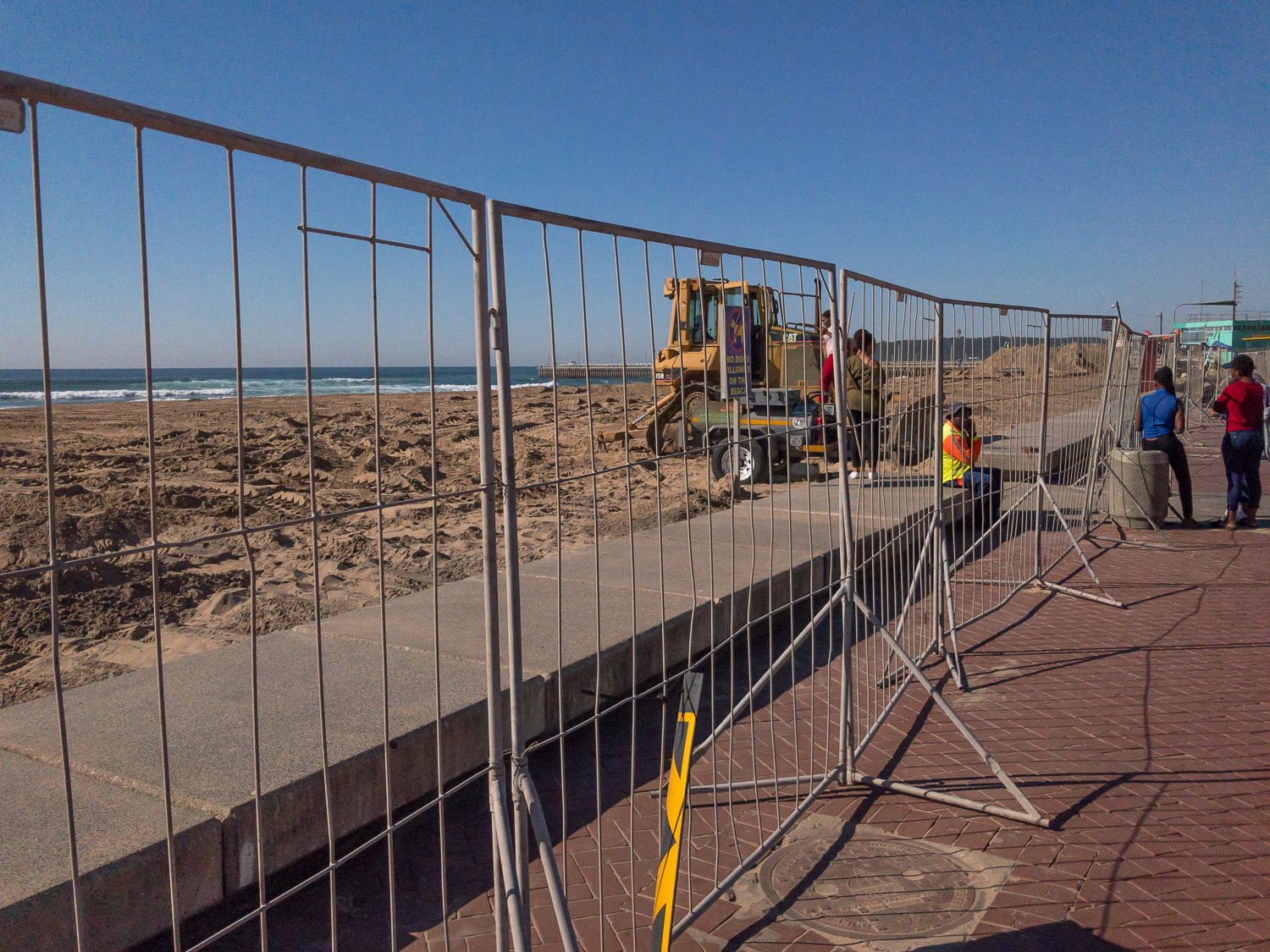 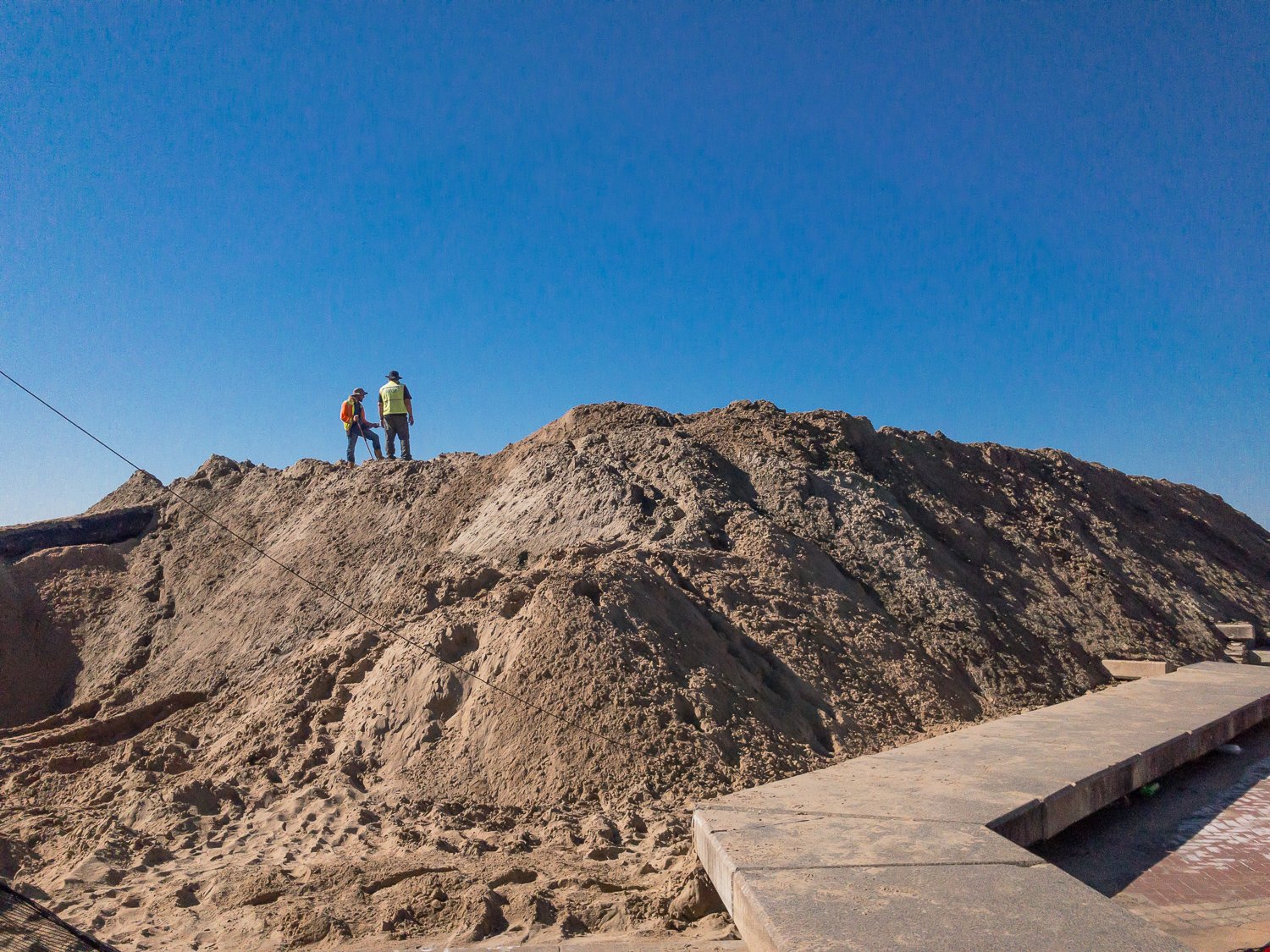 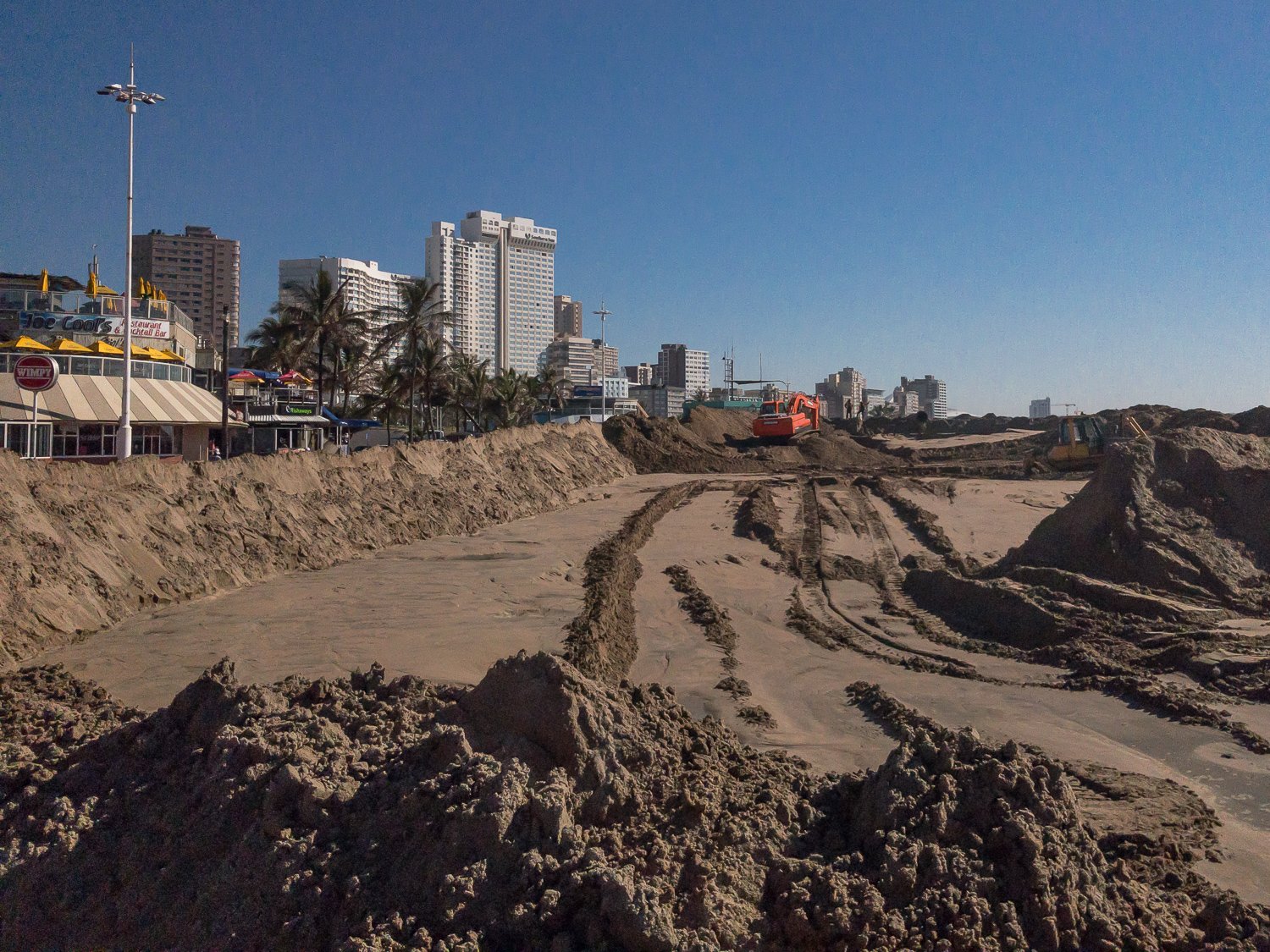 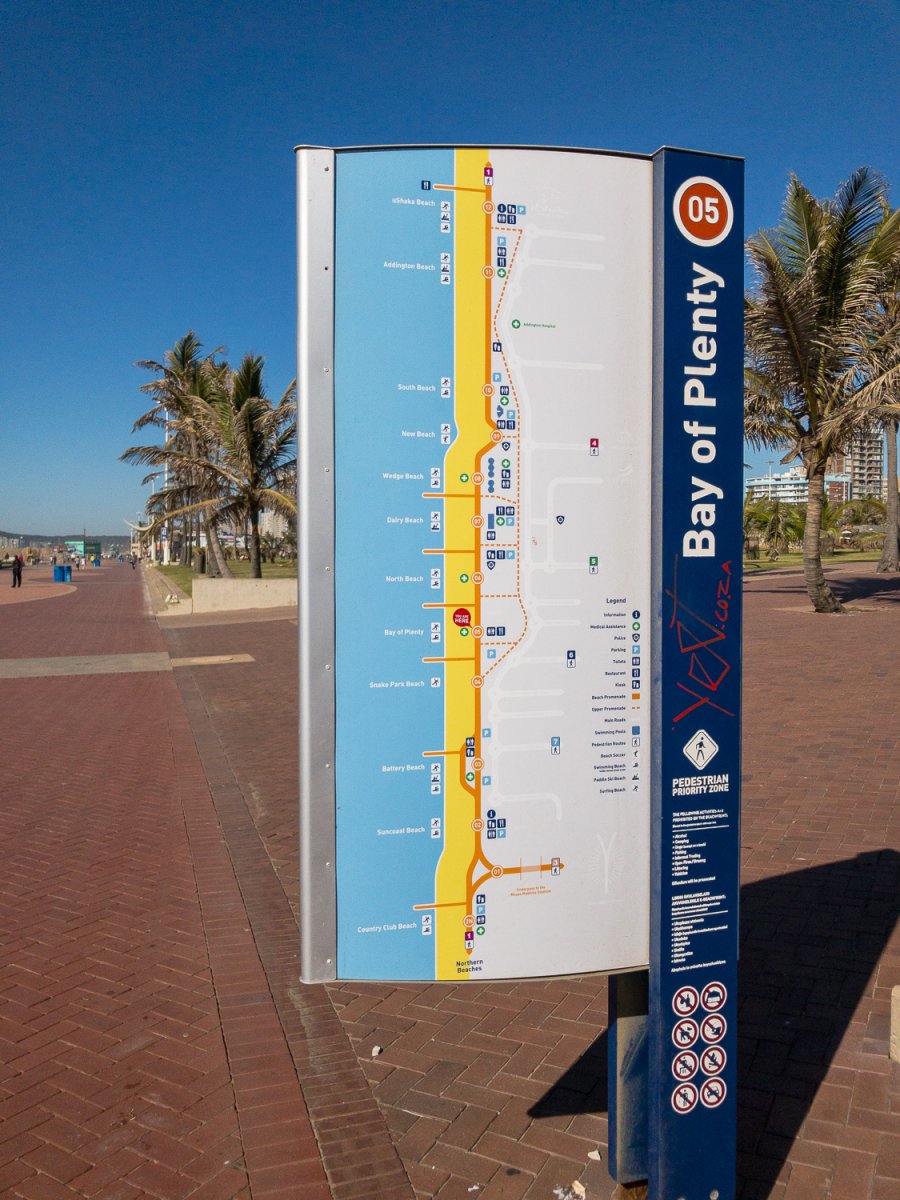 These are all iPhone pics of the current operation, taken using the Lightroom CC app.

On the subject of this Lr app, I am now a bit perplexed to have discovered that all the photos I took were seriously underexposed (by around 3 stops) when I opened up the Lightroom CC app on my iMac. I don’t use the app a lot but obviously the last time I did I must have reduced the exposure quite a lot and then not bothered to reset it to normal. The problem with using the Lr phone app in bright daylight is that the phone will adjust its screen brightness automatically to compensate for the ambient light, in this case boosting itself significantly, so unless you have got a really good memory on where you last left the exposure compensation, you’re likely to make the same mistake. That’s a bit of a design flaw in the Adobe app if you ask me (something they seem to be getting very good at doing lately). That said, I am quite impressed that the files were rescuable by lifting the exposure and shadows by a couple of stops and then applying a 50% noise reduction to them.