Behind The Shot: Dawn Of The Dead

Picture this: it’s 5am. You are in the middle of the Namibian desert and you’re about to drive 60km in the pitch dark to a distant parking lot in the middle of nowhere to meet a 4x4 shuttle driver who you are not sure is going to show up to drive you across a 5km long treacherous stretch of soft sand in the inky darkness so that you can hike for about 40 minutes across soft sand dunes so that you can emulate some photos made by a National Geographic photographer you have never heard of before.

Except it isn’t. It’s what we did on the morning of 9 September, 2013 while on a serious 3 week long road trip photographic safari through Namibia, including a stop to go and re-photograph the already excessively photographed (and much discussed) Deadvlei in the Namib-Naukluft National Park.

Why re-photograph it? We had gone there the day before, but arriving at 11am in the baking heat of the Namibian sun, along with dozens of other tourists didn’t exactly make for interesting photography. Over dinner that night the topic of a famous photograph of the Deadvlei taken by National Geographic photographer Frans Lanting came up in conversation and a couple of our Swedish guests decided that they would like to go back there early the next morning to see if they could make a similar shot. Phone calls were hastily made to operators and everything was set up for the lark. I mean photographic mission.

A logistical overview of getting to the Deadvlei might help readers understand the need for all this early morning hustle. Basically the park is only open to the public from sunrise until sunset. So if you are using accommodation outside of the park gate, you simply won’t be able to experience sunrise from inside the dunes at the Deadvlei. Unless you stay at a lodge inside the park, of which there is only one, the Sossuss Dune Lodge. However, even if you stay there (which we did for one night) you still have to drive along a 60km stretch of tarred road from the lodge to the parking lot at the end of the road, where a 4x4 shuttle service drives you along another 5km of silky soft sand before you have to get out and footslog it the final kilometer or so on that same soft sand to get to the Deadvlei. In the (almost) dark of pre-dawn. The 3D aerial view from Google seen below shows it best. 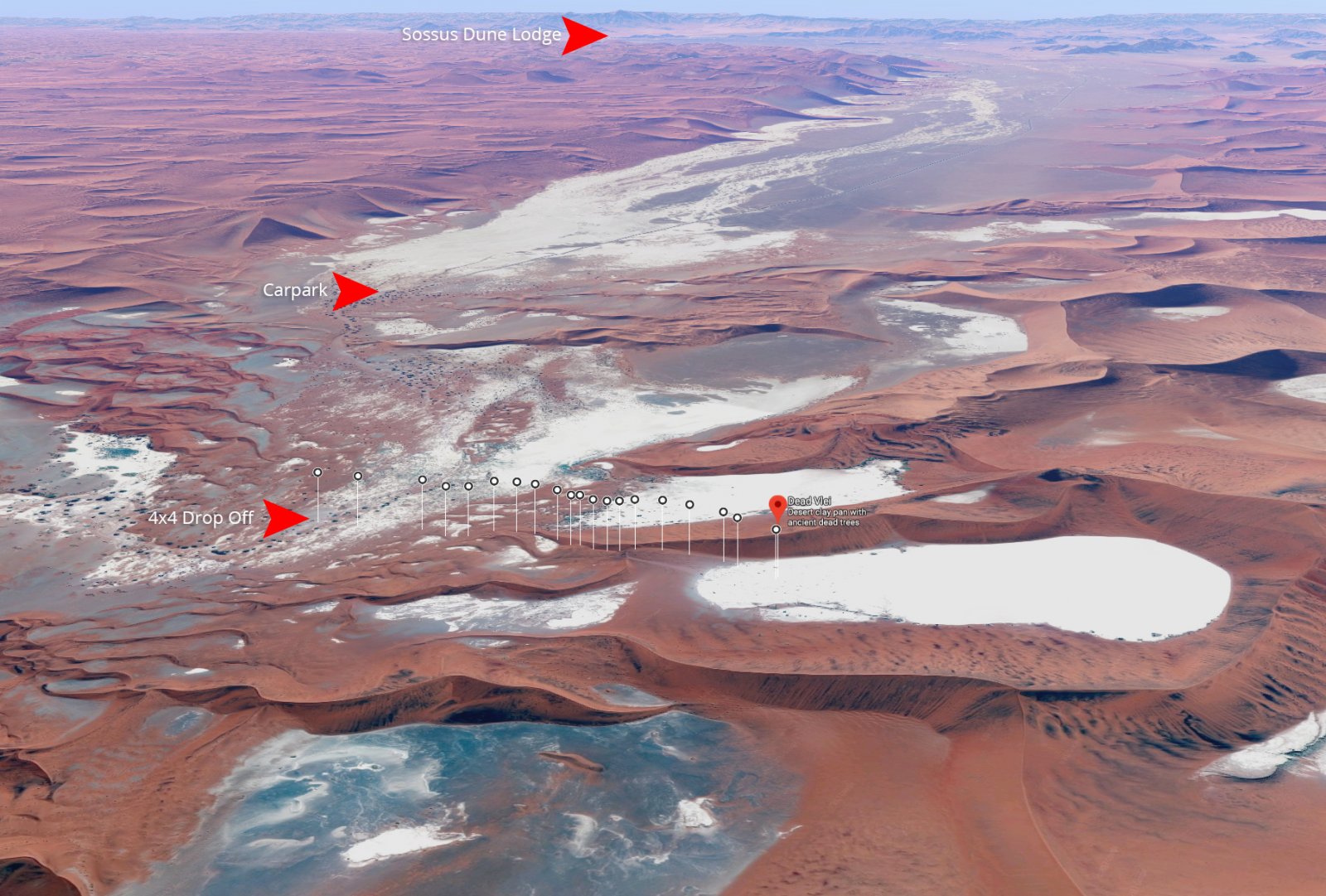 So there we were on this mission, that is me and my two Swedish guests, Victor and Roland, waiting in our vehicle at the designated parking lot for our 4x4 shuttle to arrive before the sun came up. I can’t recall the exact time he arrived, but it was a fair while after we had gotten there. There was talk between the Swedes and I of getting out of the car to explore while we waited but then there was also talk of rabid jackals and puff adders roaming the area, so we decided to wait for the driver to arrive instead. Which he did. Eventually.

The final hike from the drop-off point to the pan with the famous dead trees had taken us about 40 minutes the previous day, but that was in the baking 40˚C heat of almost midday. It was considerably cooler in the morning (as deserts are prone to be), so we made much better time getting there this time around. Our objective was to reach the centre of the pan before the sun rose over the eastern dune and began to slide down the western dune, so that we could photograph the trees as silhouettes against the bright western dune before the sunlight hit the white clay of the pan. Well, that was the plan. Mother nature had other ideas and she decided to put some clouds in the sky which kind of fouled the plan up.

The old adage of making lemonade from lemons couldn’t be a more appropriate descriptor for the shot that I am presenting in this article. I knew that because the light was dappled by the clouds I was never going to get anything remotely similar to Frans Lanting’s shot, plus for months prior to getting here to the Deadvlei I had pondered, how it would even be possible to get something visually unique from such an over photographed area. Wider lens? Longer lens? Panorama? Close-up of the ground using a fisheye? Changing my perspective and angle eventually provided the answer.

I turned my tripod around 180˚ and faced the Eastern dune. The sun was just about to creep over the top of the dune, so I somewhat hurriedly placed a 0.3 LEE Seven5 graduated filter over the front of my lens to emphasize the clouds and after a few botched attempts at getting it to line up with the cock-eyed ridge of the dune I eventually got this image. It’s one of my favourites from the entire safari. 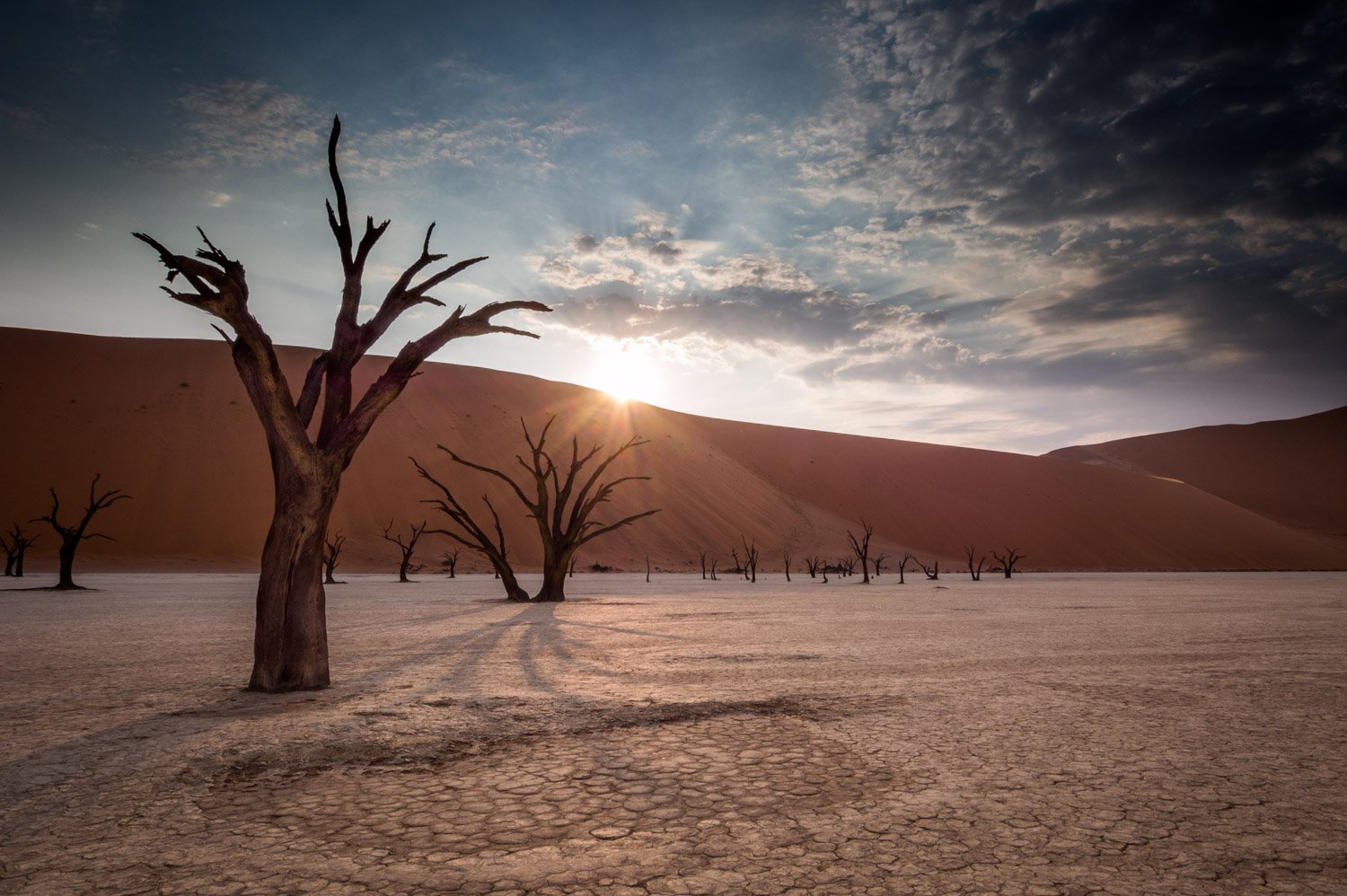 I’ve reprocessed this shot a few times over the years that have passed since I took it (the editing tools have definitely improved since 2013) and it still fascinates me to work with the raw file. The editing on this version has been done in Lightroom using mainly the exposure sliders with some dodging and burning on the nearest tree and the cracks you see in the pan floor. I also added a sharp vignette on the top corners. When I first saw the shot in editing back in 2013 I called it “Dawn Of The Dead”, mainly because to me the trees look like they are emerging from the ground like zombies. Deadvlei, zombies… it has a certain ring to it, don’t you think?

This shot below is about as close as I came to emulating Lanting's NatGeo shot. It was taken about 20 minutes before the Dawn Of the Dead shot. But I went wide instead of narrow. I still like it, but there are millions of other shots like it.

My take away from this photography outing is that you can make unique photos of things that have already been photographed to death, even the Deadvlei. The main ingredients for doing this involve timing, thinking and of course a little reliance on luck. In this case the timing was the most critical ingredient. We got there at the right time. The morning clouds were just plain luck. Especially for this area.