The "Off Centre" Mind Of The Fujifilm X-E3 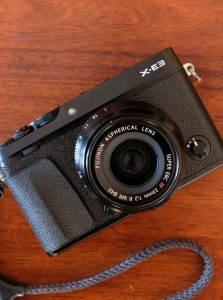 I've got a long love affair with the original rangefinder cameras (Leica M4-P & M6) and the now digital rangefinder style cameras (Fujifilm X-E2, X-E2S & X-E3). I don't know if it is due of the fact that their viewfinder is located off center (meaning not in the same optical axe of the picture taking lens). But that peculiar camera body design seems to stimulate my creativity and my motivation to brought the camera in places and at moments that I will have a tendency to ignore.

The Fujifilm X-E3 is the fourth version of a popular model design that many photographers like to bring with them as their main camera or at least as their back up camera body that happens to becoming eventually their most used. The X-E3 is using the same 24MP image sensor that the X-T2 and the X-T20 have. So the picture quality is at par of the two last mentioned models.

One of the thing which most interesting when you are using a rangefinder style digital camera is the fact that they are less noticeable, less protuberant, less intrusive in front of the subject.. This characteristic to be more discrete is always appreciated by the spontaneous photographer on the street, during a travel and even when you taking a candid portrait of a person (The camera seems to be less "serious").

Most people will talk in length about the good or the bad handling of a camera model. It is always a very personal and intuitive impression at the end. Ergonomics are designed by technicians that are biased by their own physical and cultural differences. All this has been said one thing that I have experimented with the Fujifilm X-E3 is its fine ergonomic in terms of the camera body and lens combination and I am surprise how good and easy it is still true even when you are using a larger zoom lens such as the Fujinon XF55-200 F3.5-4.8 R LM OIS. As a travel or street photographer I fully appreciate this ability. 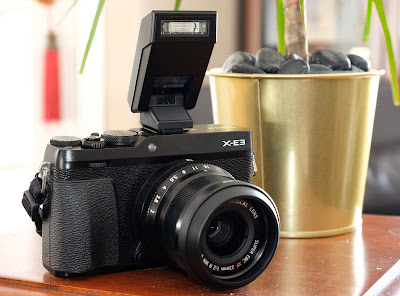 About the tiny Fujifilm EF-X8 electronic flash which is included with the furnished camera accessories I was skeptical of its practical use but I have found it very easy to bring with me and positioning on the X-E3 (You can leave it at rest on the Fujifilm X-E3 camera at its down off-position). Dont forget that the EF-X8 is using the battery pack power of your camera. As a fill-flash and as an emergency flash unit are may be the two best tasks of the EF-X8. For a more extended use of an electronic flash it is better to couple an external unit doted with its own power management.

Using a fill-in flash can be one of the most rewarding thing to do with interior photography with subject that are backlighted during the daylight period. The color temperature is similar between the ambiant natural light and the electronic flash output and the only big task is to choose an interesting exposure balance between the two in preserving or not the shadows or even simply voluntarily underexposure the ambiant (effect often use in fashion photography).

Small in-board camera flashes are a very handy solution but they are located usually too near the taking lens  and often interfering with the lens hood that you have to remove to prevent incomplete flash coverage. The Fujifilm EF-X8 give a more elevated flash reflector position. You just have to push it in its down position if you want to shut its power off.

Officially the Fujifilm X-E3 is a less "sporty" camera model than let's say the X-T series models such as the X-T20 or the X-T2 or even the X-H1. The off-center viewfinder may create a small different perspective between you naked eye and the image recorded by the taking lens but if your concentrate your attention to your viewfinder it wont be noticeable. So spontaneous photography stay a strong opportunity. 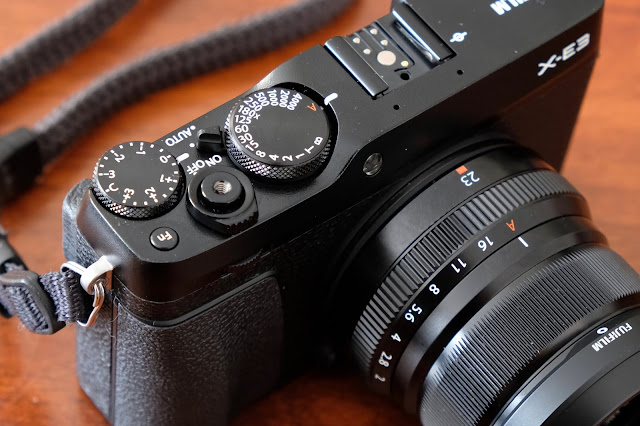 As for most of the Fujifilm X-series camera models, the controls of the photo basic parameters are designed in a similar fashion way as it is used to be for the traditional analog (film) cameras. Shutter speed, lens aperture, exposure correction and focusing options including manual adjustment can be selected with direct dials or control rings. The others parameters have to be adjusted through push buttons, touch screen options or using the versatile joystick located beside the rear screen. All these functionality controls need to be learn before really be able to master them without hesitation.

Using the Quick menu (Q) and reprogramming certains function controls can facilitate the handling of the Fujifilm X-E3. Most of the menu option presentations are easy to understand and interact but some functionalities may need more time and essaies to get the habit. There is a lot of autofocusing modes at your disposal that can tailored your shooting workflow. The all-"AUTO" option (lever next to the shutter speed dial) is a good idea for emergency snapshot without disturbing your already programed setting. 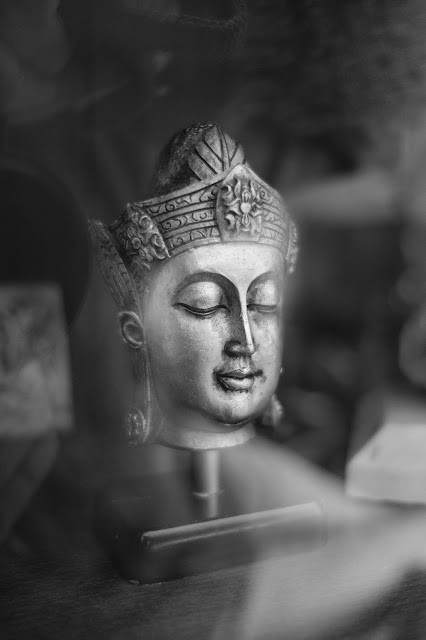 The electronic viewfinder (EVF) is fine detailed with all the (configurable) information you need and got an auto-rotation presentation very useful for vertical framing. In some specific situations the image on the EVF will be more contrasting making more difficult to evaluate low and highlights. For people who are wearing glasses like me the eye relief is more limit and will ask you to pay more attention to the corner of your framing composition of your subject. The back and none-orientable live screen (LVF) give you a better reviewing rendition of your picture facilitating a deeper image analysis.

The side location of the Fujifilm X-E3 electronic viewfinder may give you a better viewing confort compare to the centered viewfinders of the X-T series models. The  instant picture review is easier and the reviewing (Play) push button is located on the bottom right side of the LVF.

In all the Fujifilm X-E3 is a very convenient camera model that respond correctly to the compact size device but without sacrificing too much better handling compare to the larger DSLR model type.

If you are already an owner of other Fujifilm X-series models you will fully enjoy that the X-E3 is using the same battery packs and external electronic flashes without forgetting that it is part of the same optical lens mount system. 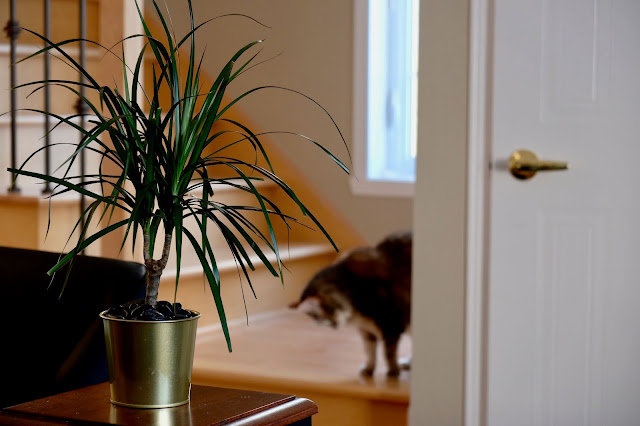 The Fujifilm X-E3 doesn't have an in-(camera)body-image-stabilization system (IBIS) and will rely on your ability to set and handle the camera to avoid generating blurry from the photographer's movement. Of course you can couple a lens with an optical image stabilization (OIS) that will help you to prevent that phenomena and further permit you to select lower shutter speed in low light situations or simply to get a smaller lens aperture (for increasing the deep of field). As a loosely rule of thumb, no stabilization is available with focal fix lenses (except for the new XF80mm F2.8 OIS Macro and the XF200mm F2 OIS) and it is the contrary with zoom lenses (with some noticeable exceptions such as the XF16-55mm F2.8 Pro). At this day the Fujifilm X-H1 is the only X-Series model equipped with an IBIS.

What I am appreciated the most of the Fujifilm X-E3 is its compactness and its very discrete status in regard of other people ressent when they are facing the camera. It is what can call not only a user-friendly camera but also a subject-friendly photo device. Combined with a short fixe focal or short zoom lens, the X-E3 appears to be part of the family. It is not perceive as an agressive intruder of our life compare to the look with the DSLRs. So the interaction between the photographer and the subject is very different and much more positive. 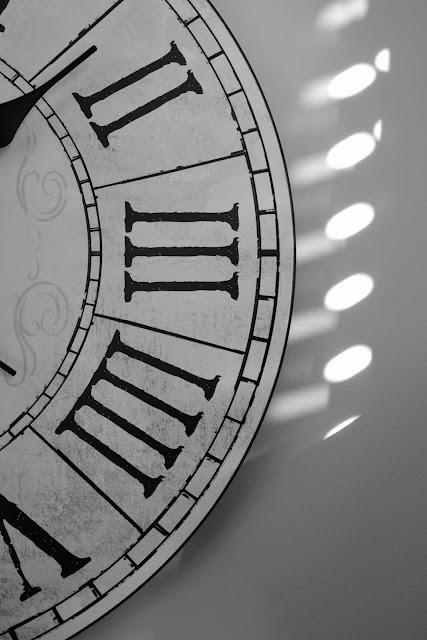 If you like Black & White photography you will adore to work with the Fujifilm X-E3. This lovely camera model offers you a choice of two monochrome reddition, standard Monochrome and Acros, with 3 different filtering variations, Yellow, Red or Green. So you can literally transform the X-E3 as a Monochrome camera without further expensive investment. (This remark is also good for the other Fujifilm models).

Is it sufficient to simply have a good camera device that can deliver not only nice, well exposed and focused pictures but which is also a creative tool fun to use and to bring with you? Sure there will always be more performing camera models now and in the future and that is inevitable in this race for better human crafting. But in the mean time we have not to forget that the most interesting and rewarding think is to do photography.

In a sense the Fujifilm X-E3 fulfill nicely the task of proximity photography essential in close urban situations or in interior contexts. The Fujifilm X-E3 is a compact photo companion that is not only a competent tool but is also an inspired creative device.