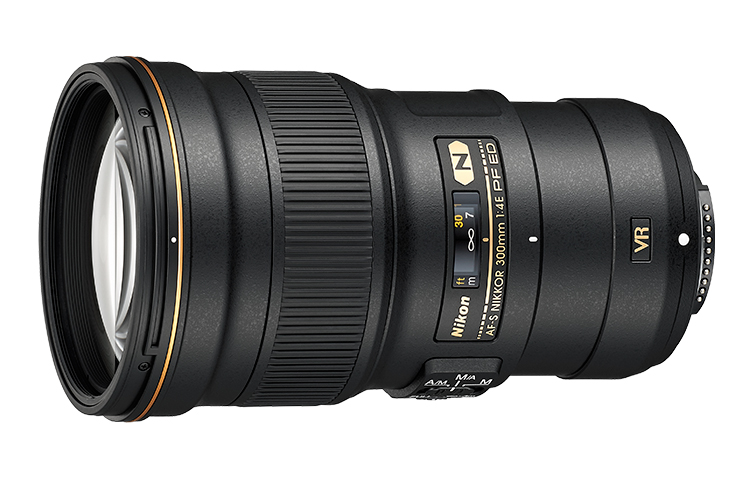 In terms of size, the use of a Fresnel principle has indeed dwarfed this 300 compared to other lenses of the same speed and focal length. Without its beefy sunshade, the PF Nikkor is just a tad longer to say an ED 180 mm f/2.8. It's lighter as well. Filter is the by now ubiquitous 77 mm size. Build and workmanship follow the current slick yet curiously anonymous fashion of modern Nikkors. The lens is slim enough to share the removable tripod collar of the 70-200 mm f/4 Nikkor. In common with that lens, the tripod collar is an optional extra. My review sample had no collar so I haven't been able to assess its qualities, perhaps owners of the 70-200/4 can pitch in here.

The flight control deck on the left-hand side has settings for A/M, M/A, and M focusing modes. Apart from the pretty obvious implication of 'M' mode, one really has to consult the paperwork to decide upon the difference between A/M and M/A modes. Apparently M/A allows faster override on the AF functionality, but the information provided by Nikon here is terse and slightly confusing. Perhaps I need to become a hard-core AF enthusiast to appreciate the true difference. There is also a range switch to limit the lens to focus within infinity to 3 m. The near limit is approx. 1.4m, which does allow for some pretty tightly framed close-ups. AF speed is decent, but no more, on my Df. Accuracy was excellent so no need for any fine tuning here.

Nikon follows the practice of some recent lenses by giving the 300 PF an electronic aperture. This means some of the older Nikons, say from the D2 series or earlier, cannot control the lens aperture. It's quite clear Nikon wants to introduce 'E' aperture to every new Nikkor, but thankfully they have commenced this make-over with specialised high-end products first. Despite the operational advantages of 'E' envisioned by Nikon, I still much prefer the fail-safe and time-tested manual aperture control directly on the lens. My Df simply calls for lenses with aperture rings to yield the perfect handling of the camera/lens combination. However, the 300 PF isn't that badly functional on the Df if you close your eyes to the lack of an aperture ring.

VR is implemented via a three-way slider control to give 'Off, 'Normal' and 'Sport' settings. There is the usual confusion as to what really controls VR; the shutter release or the AF-ON button. Or perhaps both, at least in 'Sports' mode.

The Fresnel lens construction shortens the optical path significantly. At the same time, new kinds of optical issues are introduced. It's obvious Nikon has mulled over this design for quite a long time until they finally decided to give it a go. Thus, expectations of high performance are natural and the rather stiff pricing point adds to this as well.

Now, to the business end of this Nikkor.

The main properties are as follows;

Time perhaps to put up some real sample images?

The entire frame is presented, no adjustments other than a small detail increase in PhotoNinja to counteract the slightly low contrast of the PF lens. LCA reduction is applied as well. 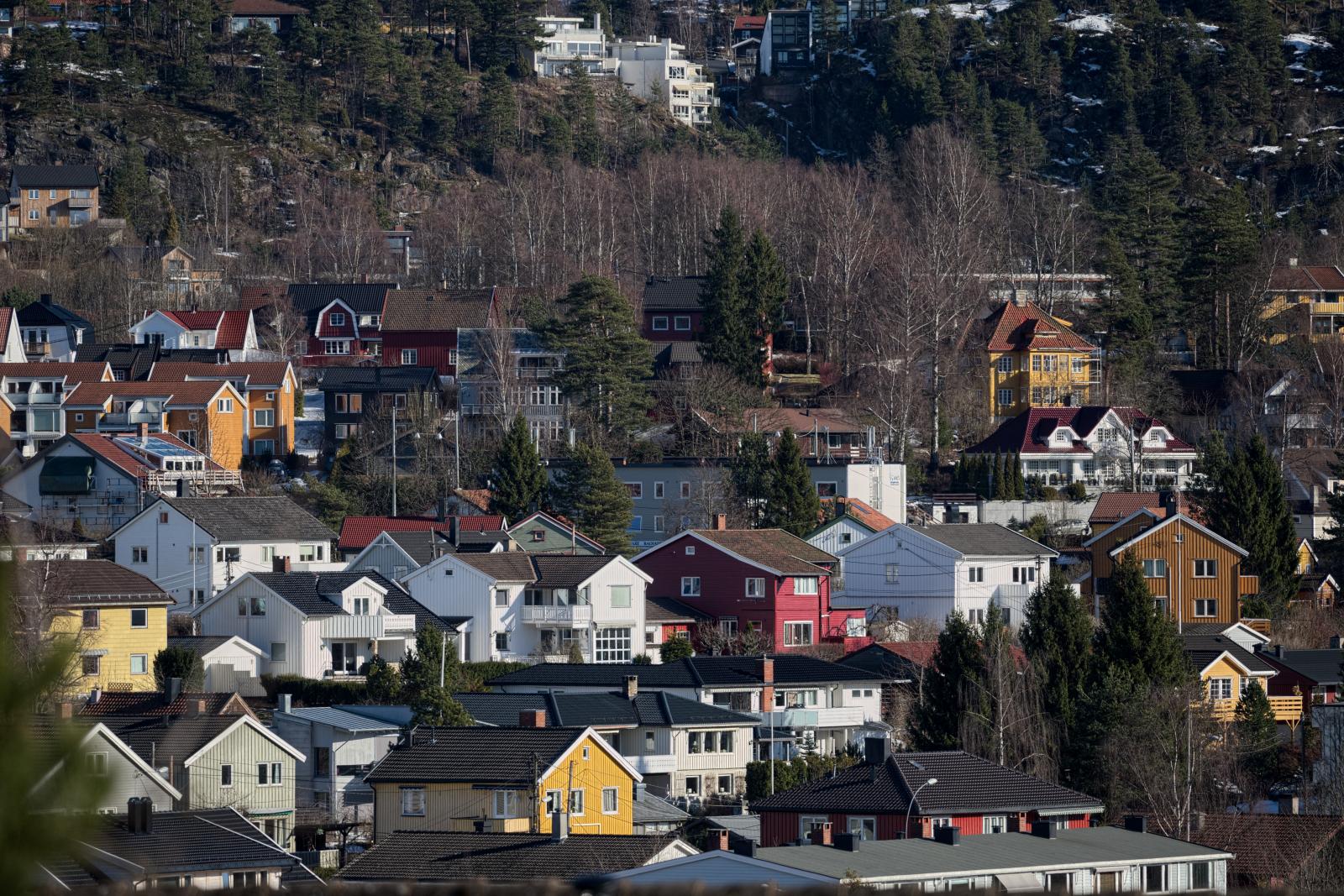 Here is an example of the detectable, yet very low pincushion distortion exhibited by the 300 PF. 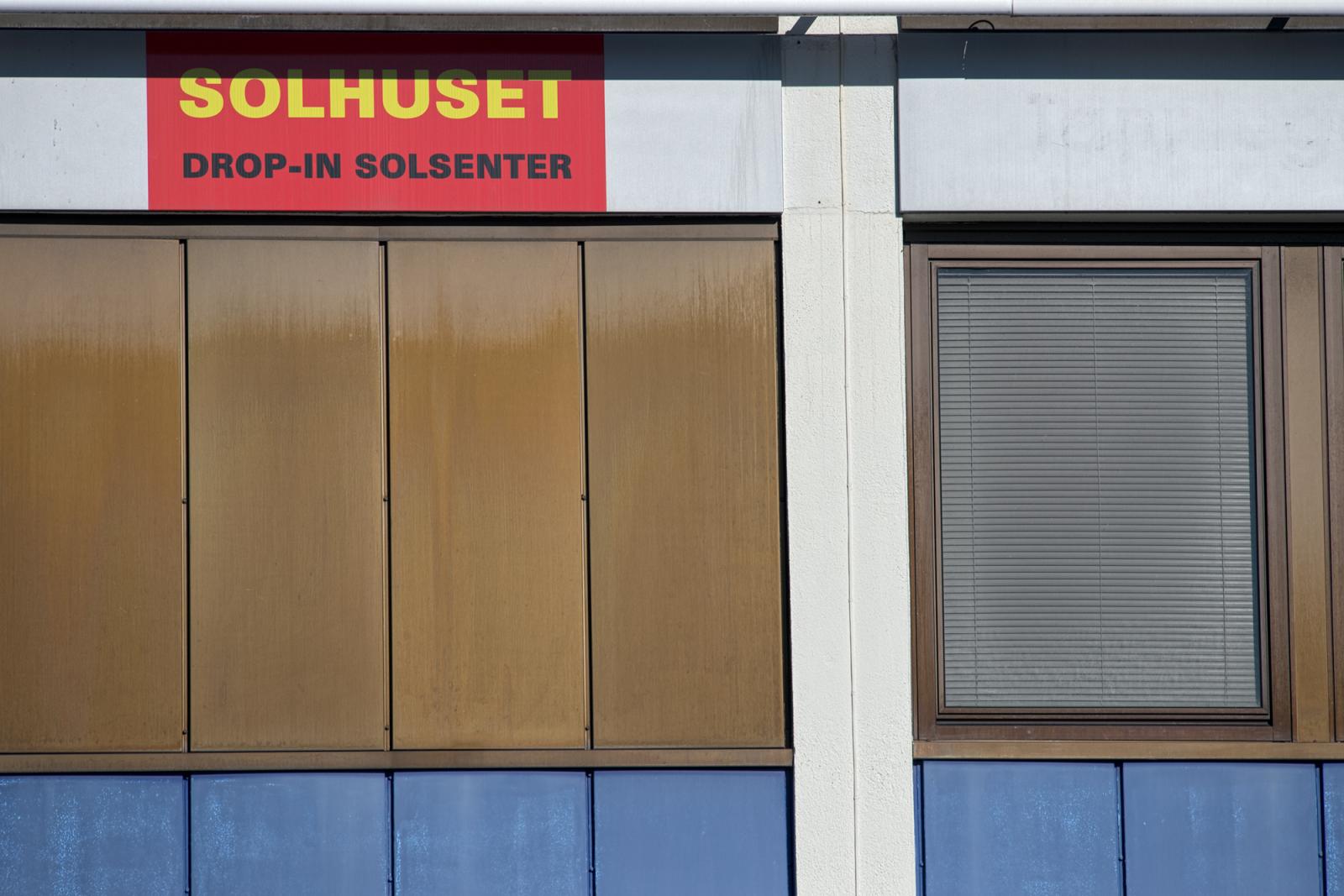 The rendition of the out-of-focus areas is quite pleasing and you can stop down a bit a still keep the background sufficiently smooth.

This is f/7.1 at which point the blur circles from specular highlights start to lose their perfectly circular shape. With the PF (Phase Fresnel) optics goes a propensity for forming 'onion rings' with these blur circles. They indeed do occur, but not as distinct as say exhibited by the new AFS 20 mm f/1.8 Nikkor. 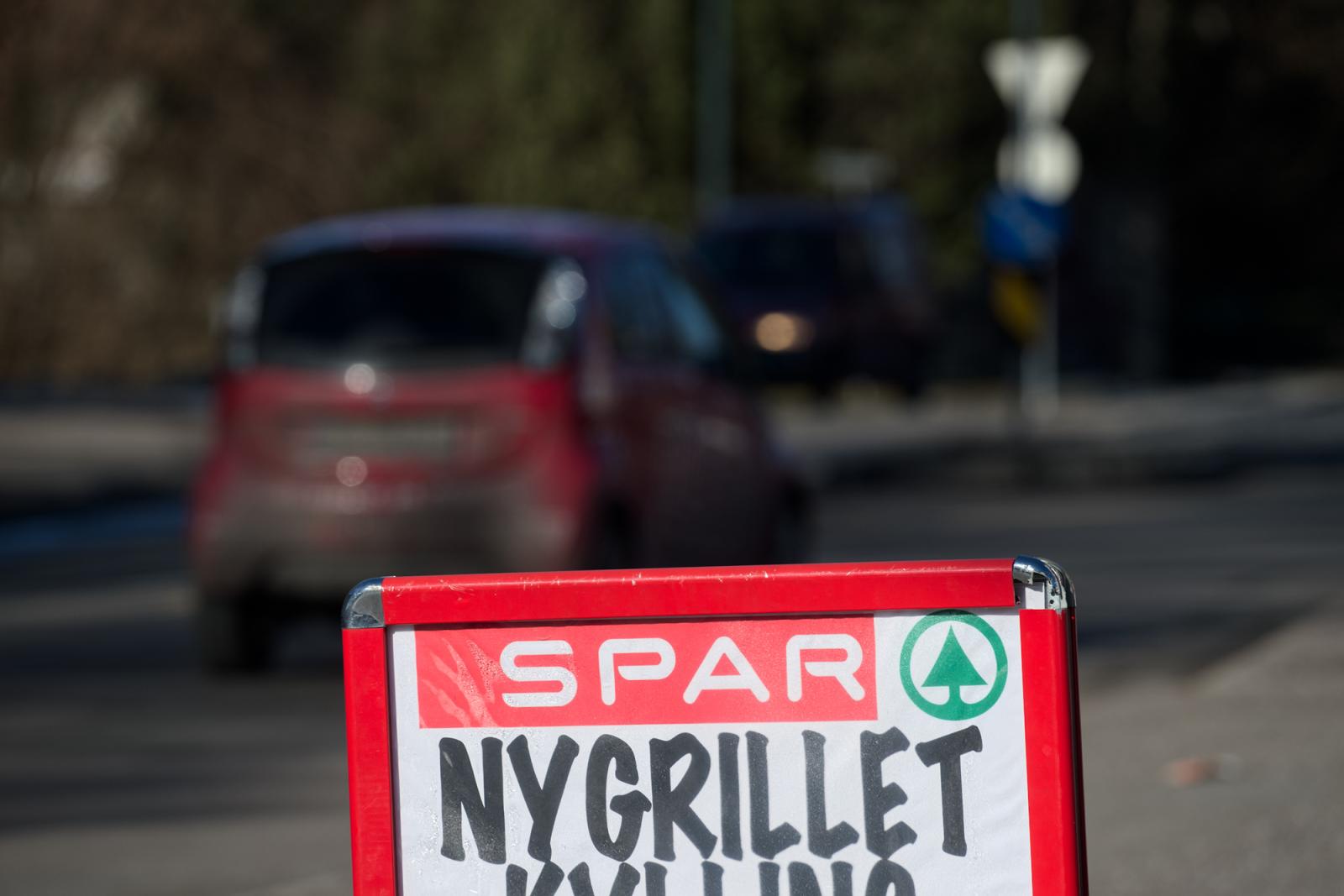 OK, so we know the new lens works. Let's look more at some details of its behaviour.

The Fresnel principle may introduce issues by flare and lowered micro contrast. It's evident Nikon has addressed these areas: although an overall lowered contrast is a hallmark of the 300 PF, it handles scene contrast surprisingly well.

Here, I tried to provoke severe flare by shooting sun reflecting off a window frame. According to the light meter, and the in-camera preview, the capture should be well and thoroughly overexposed. However, thanks to the dynamic latitude of the Df's sensor, and some internal wizardry of PhotoNinja, only a very small part of the image is actually blown out. This is the entire frame, 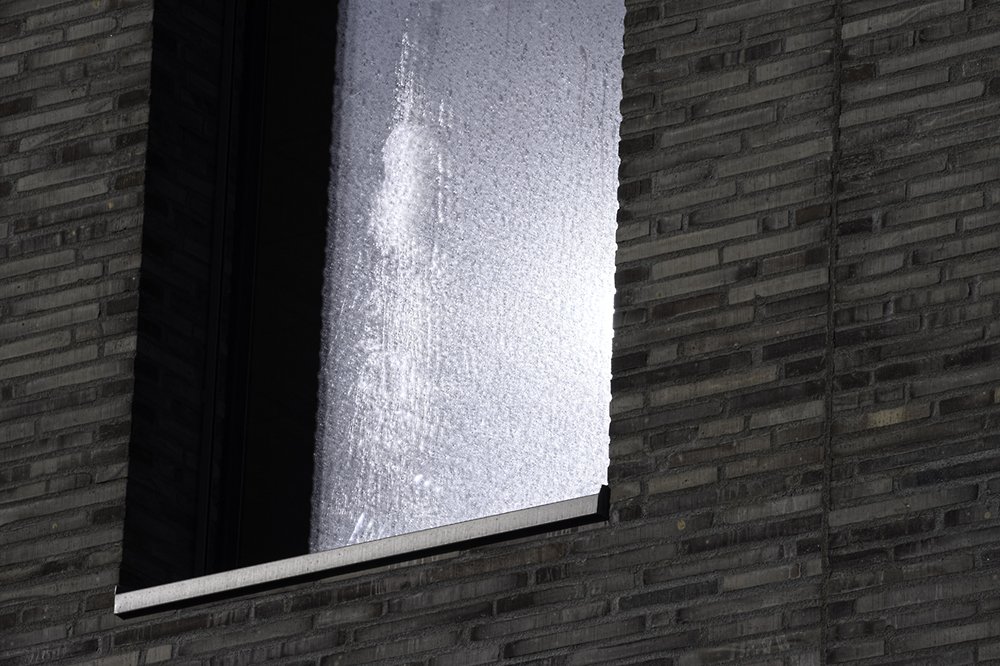 The 100% crop of the overexposed area clearly shows how well the PF lens handled the immense contrast. The transition from blown to parts with some details intact is very smooth and gradual and flare entering the darker brick wall is controlled. Most telephoto lenses of conventional construction could be hard pressed to render these details any better. 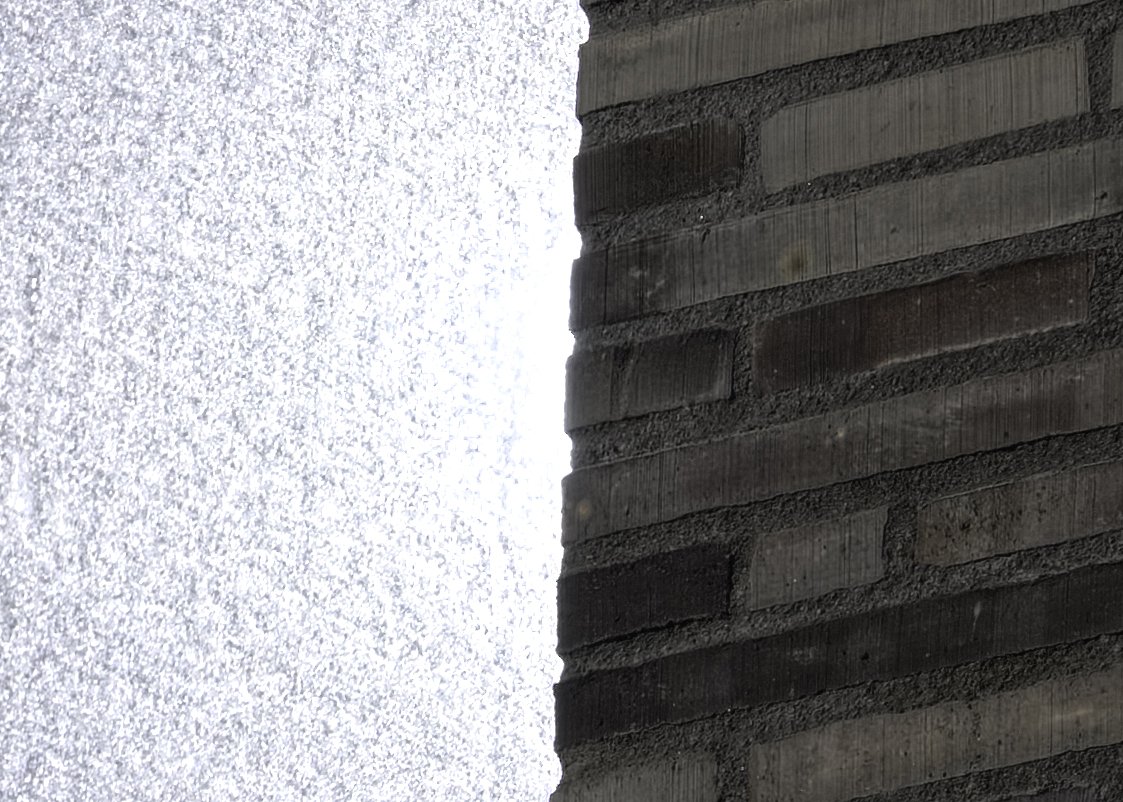 On subjects with inherent high contrast, such as snow on branches or trees seen against the sky, the 300 PF shows significant amounts of lateral chromatic aberration. As usual for this kind of colour issue, the fringing increases in intensity towards the peripheral parts of the frame. Here is an example, taken under low contrast light during a morning snow fall (the crop is the lower left corner and the branches are not in the plane of best focus). 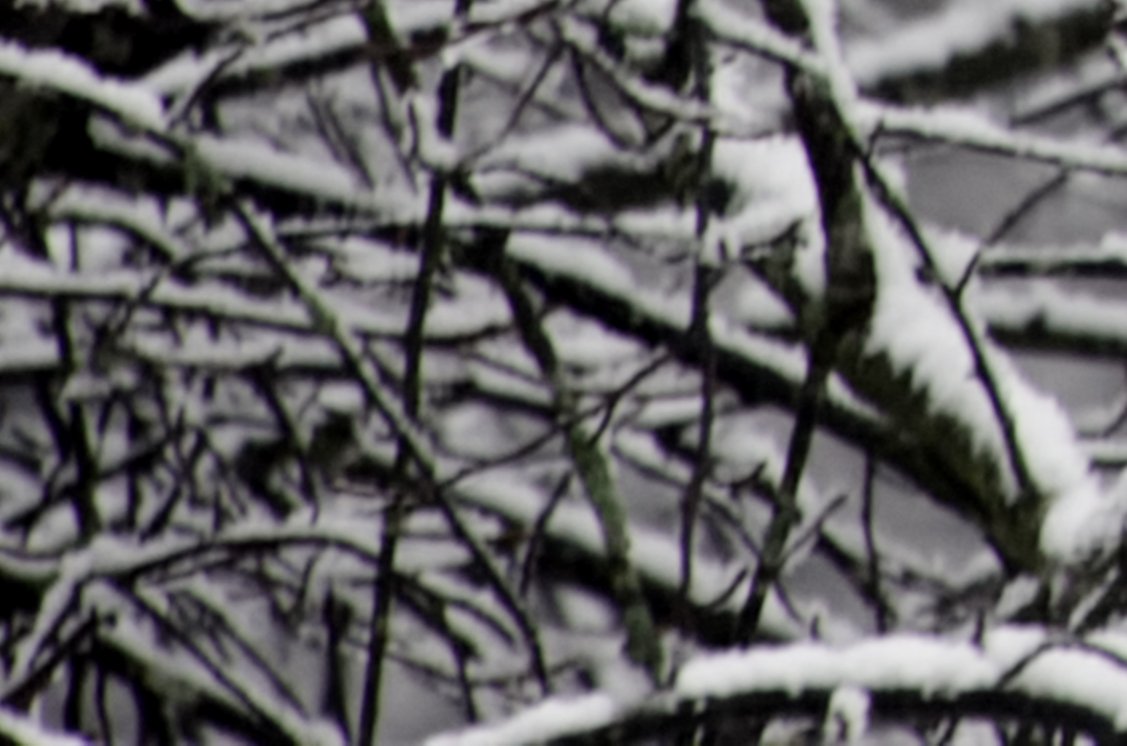 However, due to the lateral nature of these fringes, a quick fix in PhotoNinja clears up the rendition remarkably well. The crop below is the same frame run through PhotoNinja's automatic Chromatic aberration Tool so basically is a one-click affair. 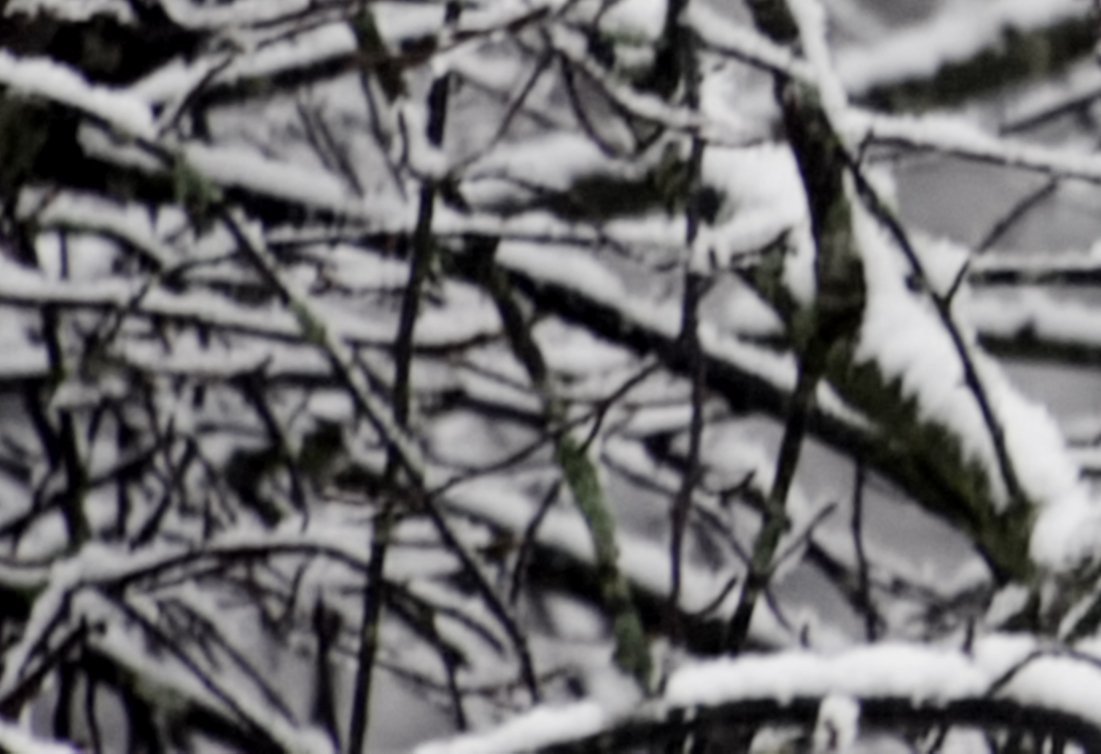 The readiness by which LCA is cleared in the software conversion is an indirect sign of low longitudinal chromatic aberration ('axial colour'). This detail of a snow-covered chair, taken at 45 degrees of incidence at the near limit, shows axial colour indeed is almost perfectly gone; 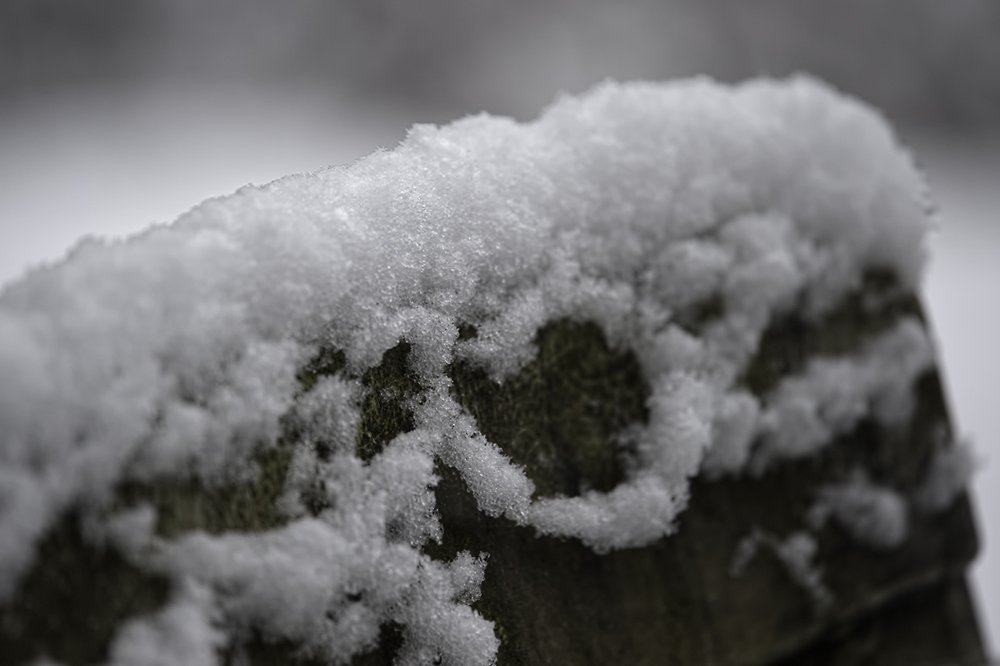 Thus, one can expect crisp and clear colour rendition for close-ups. A most welcome departure from the stock Micro lenses (Nikon and other brands the names of which shall not be mentioned) with all their murky colour fringing around the focused plane.

Now, to the VR performance. It's no secret I'm not in general too keen on having VR incorporated in a lens as the optics become more complex, and you do lose some control over detail rendition and the manner in which the image blurs appear. Nothing beats a well-designed (not necessarily heavy) tripod for getting the sharpest shots. However, it cannot be denied the stabilising feature can save your day -or make you get the picture - once in a while, so I'll accept it grudgingly as long as it can be switched off easily.

The 300 PF Nikkor has three setings for VR: Off (should be in the default position but isn't), Normal (which occupies the middle default location), and Sport. The paperwork accompanying the lens isn't very clear what the decisive differences between Normal and Sport really are. I assume the Sport mode allows a little more movement of the camera say for panning, but haven't seen much of a difference during my tests. Both VR modes apparently get into action when the shutter release is pushed halfway down, whether or not AF is initiated by the release, and deactivate if you use AF-ON to focus. A configuration that really does not make much sense to me and it defeats the purpose of the dedicated AF-ON control found on the better Nikon models.

Notwithstanding these niggles, VR really works quite well on the 300/4 PF Nikkor and you can, with some luck, shoot at 3 stops slower than the normal recommended shutter speed.

I shot some VR test shots using an Olympus DSLR as subject, to hearten Dallas' mind perhaps. Thee setting were ISO 250, f/4.5, and 1/40 sec with the lens hand-held on the Df. The entire frame is here, 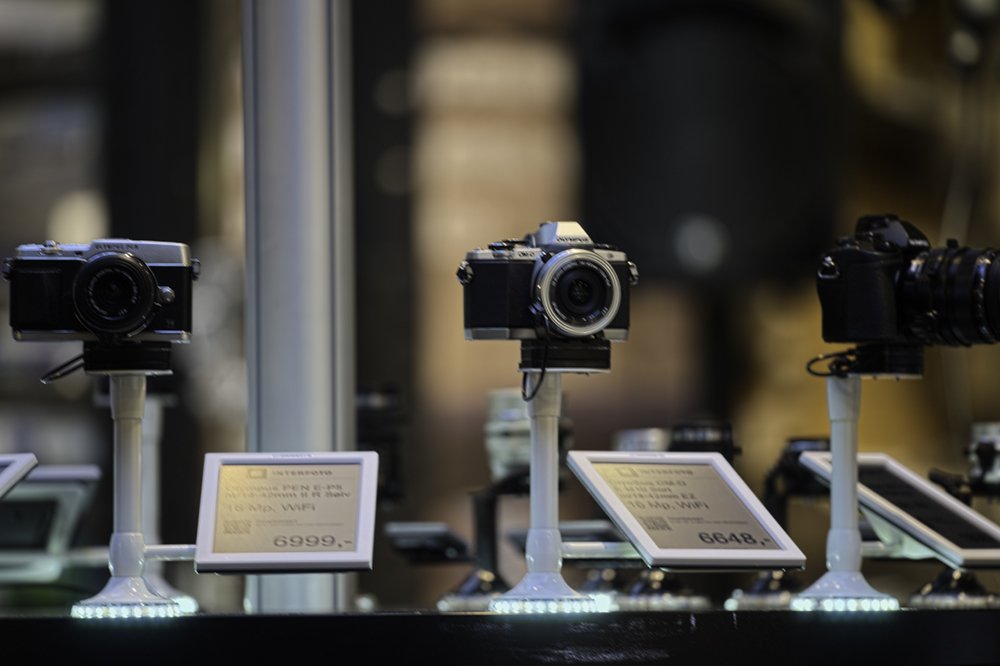 and the 100% crop of the frame with VR off clearly shows I cannot get a sharp image at that speed with a hand-held 300 mm lens. No big surprise. Let this be the reference to assess the efficacy of VR. 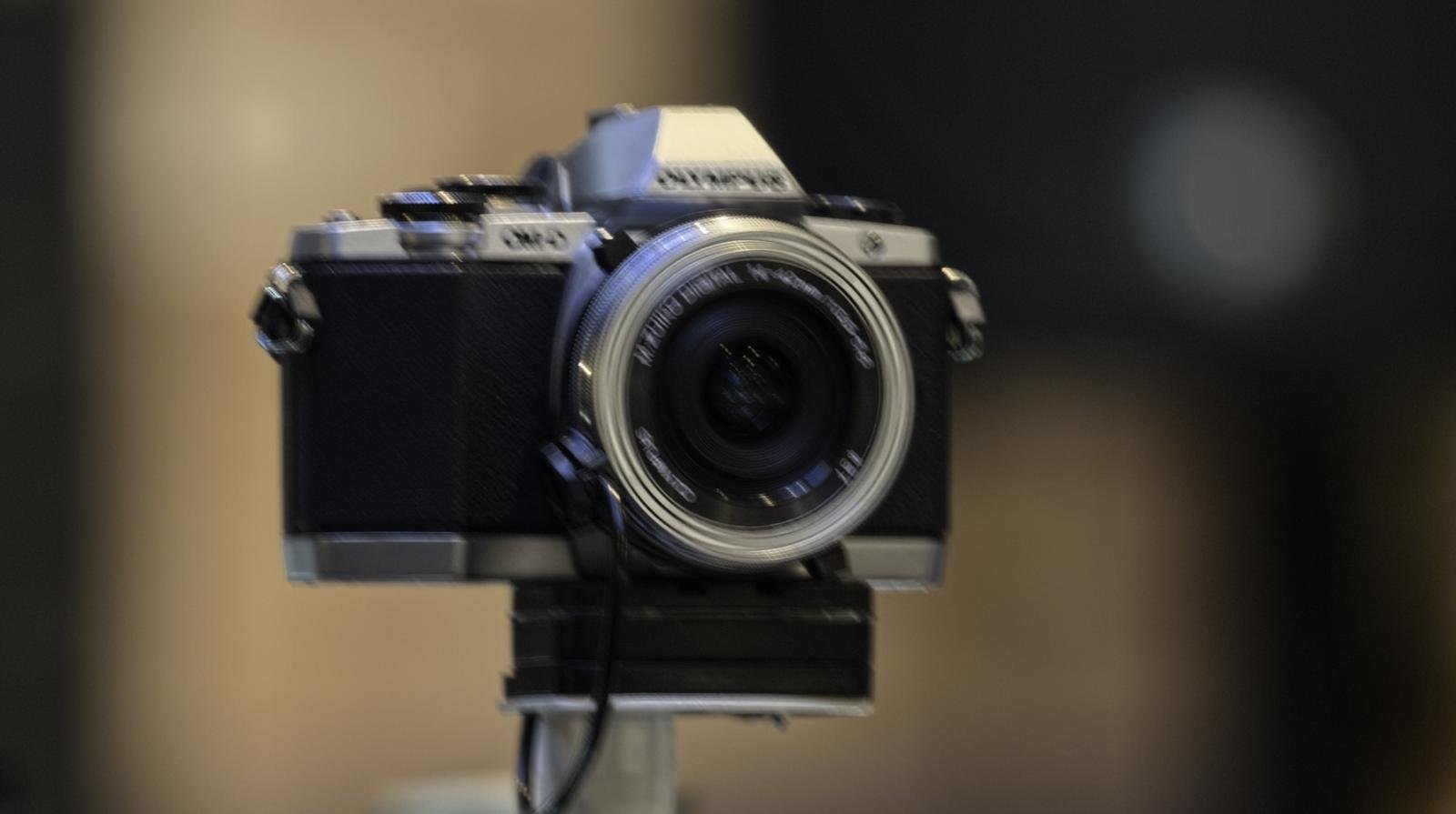 Here is the same subject , now with VR in Normal mode; 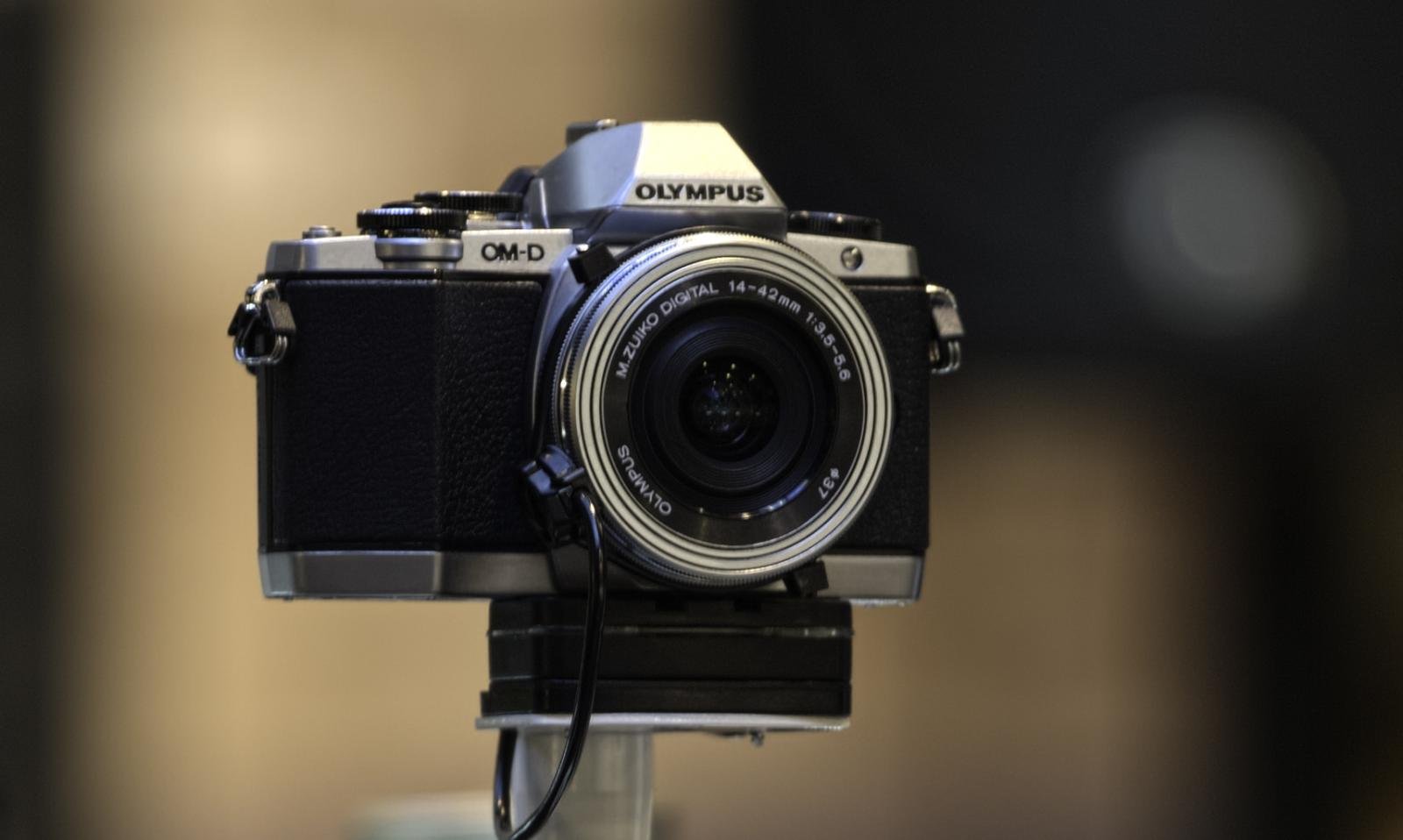 The improvement in image clarity is quite significant to my eyes.

Using Sports mode for VR produces more or less the same result as Normal, but there is a tendency to a slightly harsher background rendition. Could be a fluke under the current abysmal shooting conditions, so take this observation with at least a pinch of salt. I'll try to repeat later. 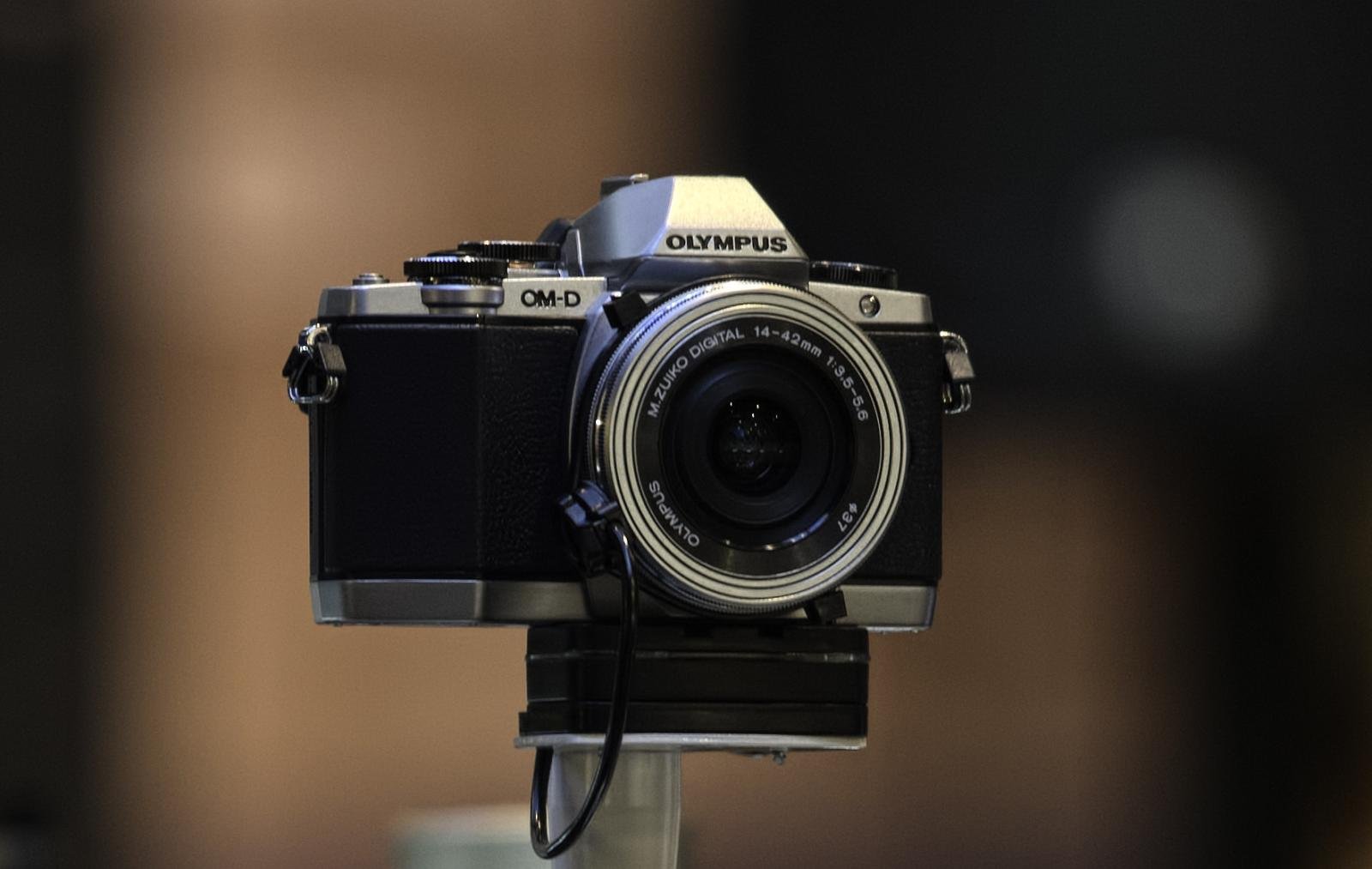 If weather improves I might venture into the field to shoot more interesting scenery. All in due time.

Aargh, still inclement weather. Thus the Moth Orchids in the window of my girl friend's home had to serve as test subjects for the close-up performance of the 300 PF. Nikon's data sheet specifies a reproduction ratio of 0.24x (approx. 1:4), which were the 300 a zoom lens would have netted it a 'Macro' designation.

However, one-fourth life-size is in no way true 'macro', so the 300 PF was saved from such disgrace. In common with most telephoto lenses, its performance drops at near range, as plainly seen in this capture of Phalaenopsis flowers. Shot at f/4, 1/250 sec ISO 400, with VR Normal activated. I tried this, and other flowers, using VR Sport mode, and had severe trouble getting focus accuracy because VR kicked in as soon as I touched the shutter release and jilted the focus off target. Besides, many of the shots (at 1/125 sec) had double contours to indicate VR-induced movement. 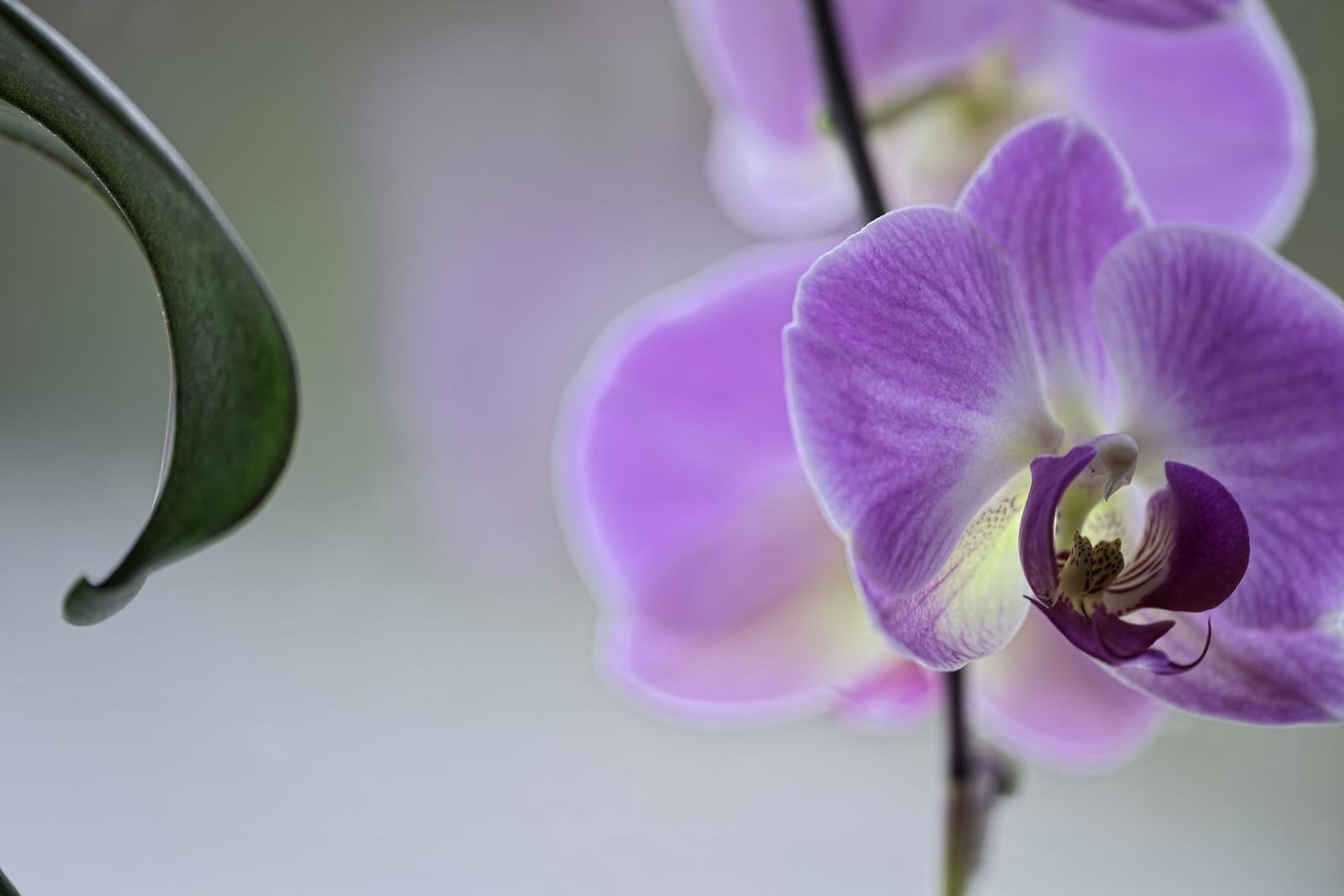 Thus, the 300 mm f/4 PF Nikkor is no substitute for a Micro-Nikkor or equivalent lens. But it can deliver the image in a pinch.

I repeated close-up tests with a tripod support to eliminate the potential adverse influence from hand-holding the lens. Using my AF 200 mm f/4 ED-IF Micro-Nikkor as a reference, the 300 PF Nikkor now delivered much better results. Not entirely up to a genuine Micro-Nikkor, but close enough for for most situations. However, it again proved imperative that VR should be turned off and you also should employ proper technique such as combining mirror lock-up and a cable release to capture the shot. For long exposures with a tripod-mounted lens, VR is likely to degrade the image by making blurs in one ('Normal' mode or two dimensions ('Sport' mode). For these tests, shutter speeds ranged from a 'fast' 1/8 sec to a 'slow' 0.8 sec.