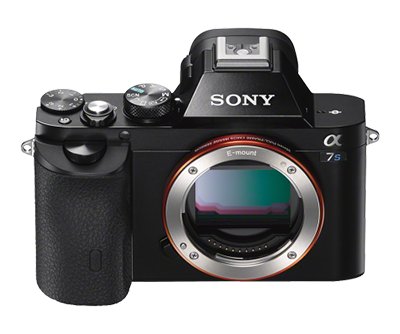 Last year when Sony announced their “full frame” 135 mirrorless camera duo of the A7 and A7r they got the attention of quite a few photographers who wanted the large sensor capability of a 35mm frame in a smaller, lighter mirrorless body. The advantages of the mirrorless cameras I have written about at length, so I won’t go into them again for this article, but one of those advantages was that you could use an adapter to mount just about any lens from any manufacturer on the A7’s and enjoy the short depth of field you get from a large sensor on either a 24 or a huge 36 megapixel sensor. Lots of shooters jumped onboard this train.

Now Sony have announced a third body in the A7 series, namely the A7s, which is the same body, but with a lower resolution of only 12 megapixels and according to the press release the ability to shoot a 135 body at ridiculously high ISO values (somewhere over 400,000 ISO).

What’s interesting to me about these cameras is not so much that they’ve made the first mirrorless 135 system (not counting the Leica M’s because they are not autofocus), but that they’ve done it in three distinctly different flavours, giving the photographer some system options that they don’t get from any other manufacturer at present.

If you want to shoot extreme high resolution images you opt for the A7r with its 36mp sensor. You get amazing resolution and the ability to produce massive prints with the best possible dynamic range.

For general purpose photography you opt for the A7 with its 24mp sensor and you have not only great image quality, but you don’t have to be as careful as you would need to be when shooting the high res A7r.

If you want to go nuts and shoot in total darkness with scant regard for camera shake you get the A7s and pump up the ISO until you exceed the max shutter speed in near darkness and you get great image quality.

On the top and the back they all look like this:

What I like about this approach is that it’s the same body used in all three variations, so the buttons and dials are exactly the same. The only thing different is what's inside the box. If you’re shooting with something like Nikon or Canon and you wanted the same sensor flexibility you would have to buy three completely different bodies, each with it’s own interface and layout. For example, to get the same kind of sensor variability with Nikon you would have to buy a D800, D610 and D4S. You would have to know each body quite well to be able to swap between them easily. Right now pros shooting the top end of the DSLR market don't have a body like the Nikon D4S or Canon 1DX packing a 36mp sensor, or even a 24mp one. You've only got the one sensor to choose from. If you want more pixels you have to look at a different body and one that doesn't share the same feature set as your pro body.

By offering different sensors in three identical bodies Sony have given their brand adopters a very handy system perch that will allow them to accomplish all manner of things photographically without having the inconvenience of needing to learn a new button layout or menu system for each iteration. I think that’s a brilliant strategy. Can Nikon and Canon compete with that? Well, given the price of the D4S I don't see too many professional photographers being in a position to be able to afford three of the same types of bodies. However, it does beg the question of a future pro DSLR having the ability of being able to swap out the sensor as part of the system. Whether that's something they can do feasibly remains to be seen. Personally I think it would probably take them too long on the R&D front, so realistically speaking following Sony's approach of offering a cheaper mirrorless body might be the way forward. For Canon this would probably be a lot simpler than it would be for Nikon, who bring with them over half a century of legacy engineering to be worked around.

What Sony needs to do now to build on this sisterhood of bodies is to further develop their lens line-up as well as the range of other accessories that photographers seek out (flashes, remotes, etc). If they can begin to offer the same kind of lens choice depth as the major players like Canon, Nikon and Micro Four Thirds, they will be a very strong market player going forward.