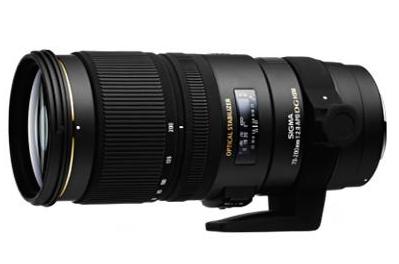 Here is a lens from Sigma that in its previous incarnations has come in for a fair amount of criticism from users, particularly regarding its sharpness. I've read several reports from users of the old versions of this lens and not many of them had very good things to say about it. The most common complaint was that the lens isn't sharp at wide apertures. So when I received a brand new Sigma 70-200mm 2.8 OS for use on our 2010 Sabi Sabi Safari I was curious to see how it fared.

This is an all new design from Sigma. It comes with the HSM motor for super fast autofocus, as well as Sigma's Optical Stabiliser (OS) technology. Sigma claims that the OS allows you up to four stops extra hand-holdability (if there isn't such a word in existence I am laying claim to it now).

The 70-200mm 2.8 lenses have become a staple requirement for many photographers, particularly in the reportage genre, although quality news photography appears to be fading faster than dial up internet connections. I use this lens mostly for stage photography and on occasion I might use it at events if I want to get some unposed close ups of people in crowds. It's not a lens to be used for group photography though, unless of course you're pretty far away and you're shooting small people. For wedding photographers it's a good one to use in the church. You can get sharp images in poor light at wide apertures and slow shutter speeds.

At the time I got this lens I had just relieved myself of the older Nikon 80-200mm 2.8 AF-D, so I couldn't make any direct comparisons relating to the size, but going by memory the new Sigma is a bit thinner and longer than that Nikkor. It also has a much better hood as well as an easily removable tripod collar.

The one thing that I like most of all about the aesthetics of the new lens is that it is for the most part sans that horrible matt paint that Sigma's EX range have been sporting in recent years (I've complained about that in previous Sigma reviews). The new lens barrel is made from some kind of durable plastic, which makes the lens much lighter and less susceptible to cosmetic injury. You will still find the matt paint on the tripod mount, zoom and manual focus rings though, which is pretty weird.

Build quality is very decent. It's got the usual switches for AF/M focus, plus one for the OS, which like the Nikon lenses has two modes. I found the zoom and manual focus rings are very nicely damped and have a good feel to them.

It feels good in the hand and appears to be perfectly weighted with the Nikon D700 body. I can easily remove the hinged tripod collar with one free hand and I don't have to remove the lens from the camera to do this. Interestingly this tripod collar is interchangeable with the one on the much bigger Sigma 120-300mm 2.8 EX.

The hood supplied with the lens comes in two parts. It bayonets together to make a really long hood for use with DX sensors, or you can use the single part hood with FX bodies.

As with every Sigma I have ever owned, you'll get a lovely nylon case to store in the box, in the top of your cupboard. :-)

Where the Sigma really shines is in the OS department. This is a very good optical stabiliser. I have been able to get razor sharp 200mm images shot hand-held at f/4 and 1/10sec. I could never do that with a non-stabilised lens. Of course you can always lug along a tripod or monopod if you want to use those old tech lenses. When I was on safari with the Nikongear.com gang last year I coupled the lens with the Sigma 2x teleconverter and was able to get many excellent shots without the use of any camera support. This lens works particularly well with that TC, retaining all functionality, so on an FX body you would have a 140-400mm f/5.6 optic with full Optical Stabilisation, which is pretty handy, considering you can shoot a D700/D3 at ISO 6400 and get away with it.

On its own I couldn't ask for much more when I shoot it at f/4 (which is probably 99% of the time). If I am a fair distance from the subject I've got enough depth of field to isolate them, but still keep them dramatically sharp and yet throw even the busiest the background into an eye-pleasing mash of creamy pixels. This lens has a very unobtrusive bokeh with the OS switched off.

On occasion I have picked up a bit of flare if I am pointing this lens directly into a strong light source. It's odd though, because if I change position just ever so slightly and shoot the same thing I lose the flare and everything is back to hunky-dorey again. I wonder if this doesn't perhaps have something to do with the position of the optical stabiliser at the time of the exposure? The flare is rare enough to make me think that this could be entirely possible, because as you can see from the image below, this is shot directly into the rising sun with no issues at all.

I find that the auto focus, whilst very responsive, is just a little bit slower than what I am used to with similar lenses I have used in this zoom/aperture range. I'm talking a minuscule amount here, not something that should put you off the lens though. On my D700 it tracks focus very well, albeit a little noisily for a lens that is driven with an HSM motor.

Nothing much to report on here, other than that I wish it had none of the weird matt paint at all.

If you're looking for a really good lens to use for environmental portraiture, stage work and anything else that you can fit between 70 and 200mm focal lengths, this is a lens you should look at. It's considerably cheaper than the Nikon VRII equivalent – I'm talking over $1000 cheaper – and I'll be honest with you, there is no way anyone can convince me that the Nikon is nearly twice as good as this lens.

After spending time with it in Sabi Sabi in 2010 it has now become a big part of my professional set up.

We recommend buying this lens from Amazon.com

Here's a shot of a neighbour's rooftop (about 30-40m away from my window) shot at f/2.8 with the OS on. The Durban harbour is in the background.

My son is amusing himself with his skateboard while a Muslim looks on in wonder. D700, ISO 200, f/4

If you have also used this lens, chime in with your own experiences here