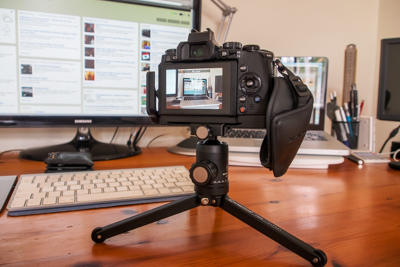 Tabletop tripods come in very handy from time to time. I have realised this on a number of occasions where I wanted to support my camera outdoors but had nowhere to lay it down that wouldn't result in it falling victim to some or other calamity. Examples; you're out on a walk and you come across a scene that you'd like to be in but there's nowhere to set the camera that will result in a good shot, or, you want to make a video of a performance and there really isn't anywhere to put up a full size tripod but you do have a table available. Some other applications that others might find this product helpful in are things like food photography where you have a plate on a table but you can’t get a full size tripod close enough to it and you don’t want to use a longer lens to zoom in.

Having a small tripod in your bag for these situations is a blessing. I've had a variety of these things over the years, with a range of different designs, including bendable legs, pop-out legs, and so on. None of them went the distance mainly because they were made from plastic parts or they had integrated ballheads that broke or jammed on me and weren’t supposed to support a massive camera like the Nikon’s I used to use.

At the same time that Sunwayfoto brought out their range of carbon fibre tripods they also introduced a tabletop tripod that certainly fits the bill as far as quality materials go. The T1A10 is a black anodised aluminium table top tripod that can also receive a ballhead with a 1/4" thread. It's actually perfectly suited to the Sunwayfoto FB-28i ballhead, which is a really small, inconspicuous, but capable support for smaller mirrorless cameras. 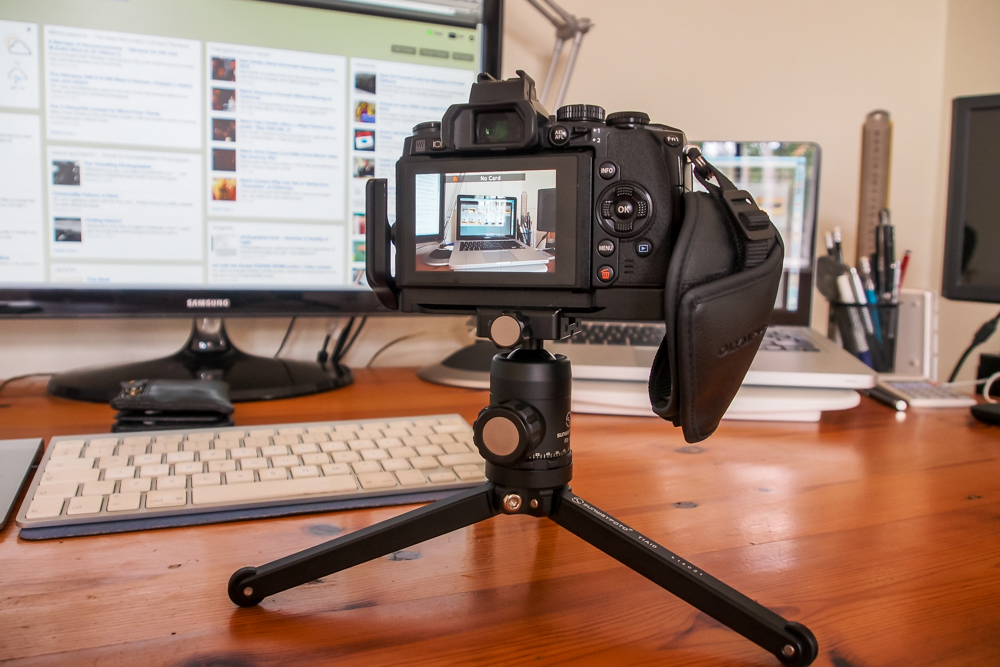 The T1A10 together with the FB28 only weighs a hair under 400g and is 21cm long, so it's not about to sandbag you if you're strolling around with a lightweight mirrorless kit in your bag. I slip it into the ThinkTank Retrospective front pouch and don't feel it there at all. When the legs are splayed and you are using the FB-28i head it stands 12.5cm high.

Another option I have if I want to keep the weight down even more is to use not a proper ballhead, but a small aluminium umbrella holder that lets me do the same thing as the ballhead, but without the added weight of the FB-28 and the necessary plates that have to be attached to the camera. I unfortunately don’t have plates for every camera I own, so this has proven to be a very useful option as the umbrella holder fits directly into the tripod socket of my little Olympus PEN E-PM2 which I often use as a video camera to record my son’s stage performances with his band (provided of course that I can find an unobstructed view with a table nearby on which to stand it). 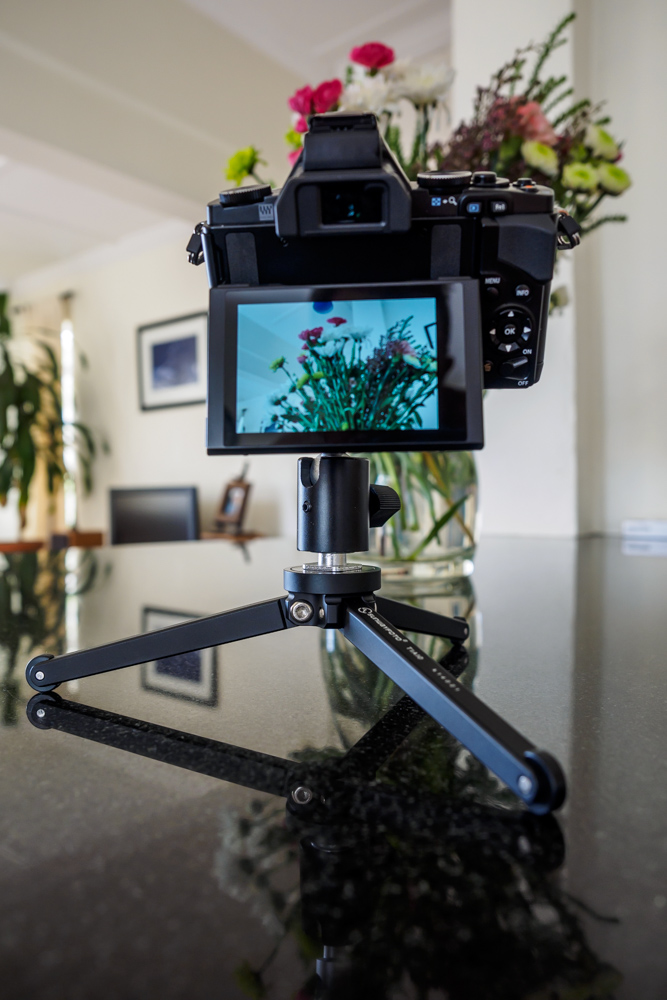 Shown with my modified umbrella holder and an Olympus E-M5

The only thing negative that I can say about this bit of gear is that the legs need to be tightened with a supplied Allen key if you want to use the tripod in any position other than the full splay. The legs will flap around after you move them once tightened as the screws work themselves loose fairly easily. The screws don't fall out though, which is a good thing otherwise you'd have to assemble the tripod everytime you wanted to use it. I just leave the legs loose now but bind them with one of those Nite Ize rubber ties when not in use. 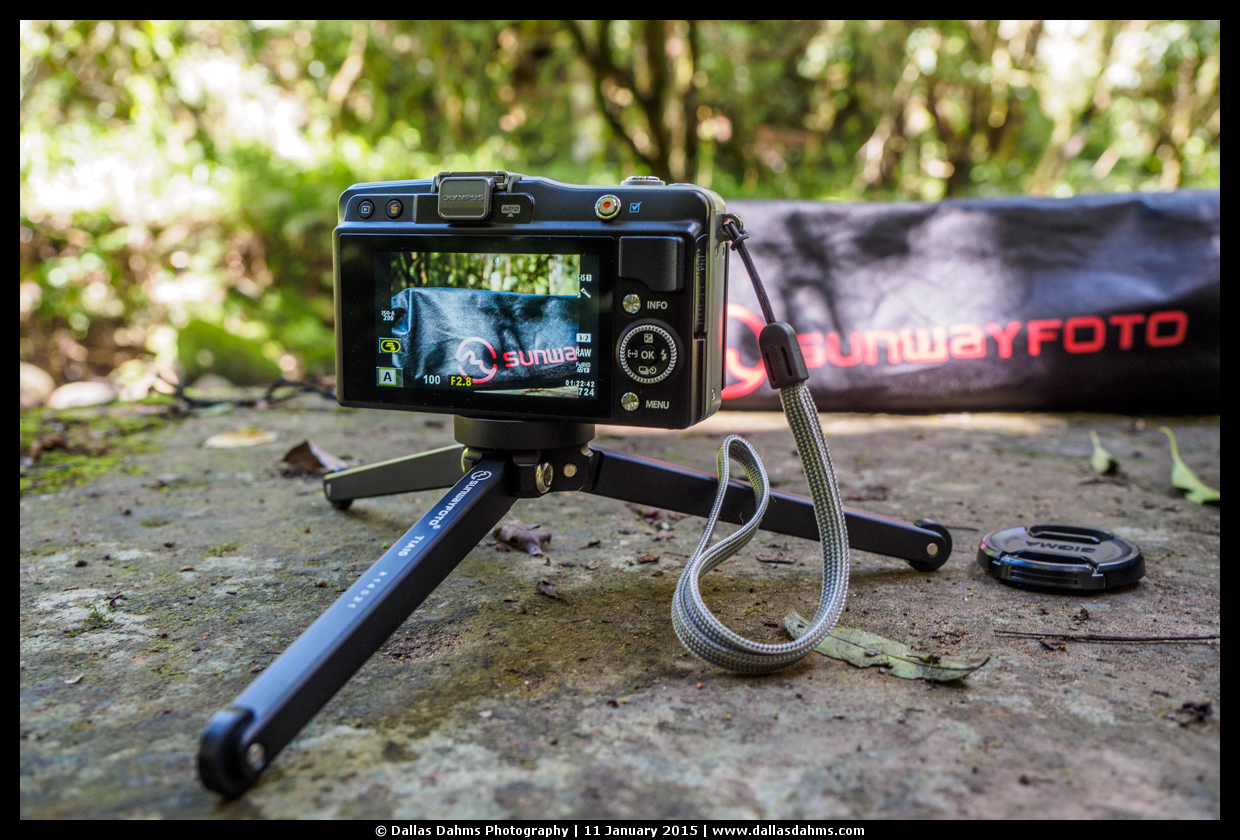 Something that I find curious about the design of this tripod is that the feet of the tripod look like little wheels, but they actually don't move at all. I suppose they are made this way so that you can angle the legs at any position in their range of movement and the same contact with the surface is achieved at any angle.

All in all I think it’s a very handy little thing and will certainly last me for a very long time. You can get it from the Sunwayfoto online store for $33 including free shipping via China Post.