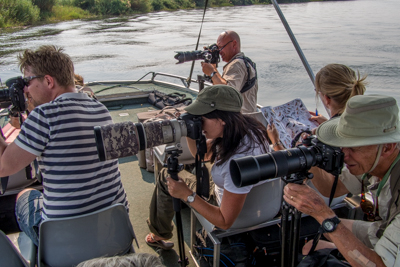 Botswana is an amazing country. It’s blessed with unimaginable beauty in the form of Africa’s most exciting rivers for wildlife and adventure, namely the Chobe and Zambezi, which is where we’ll be spending most of our time on our 2014 feature safari. We called this safari Wild Waterways Of Botswana for good reason. It’s going to be a wild adventure.

Anyway, this safari will be filled with photo opportunities and this article will go through some of the equipment I will be taking with me to maximise those opportunities. It will be the first safari where I am not taking a DSLR so gear wise I am aiming to be light, but at the same time fully prepared for whatever comes my way.

No surprises that my main body on this safari will be the amazing Olympus OM-D E-M1 with the HLD-7 grip. While I have only had it for a few months I am already very comfortable shooting with it in just about any situation. I’ve used it to make shots in a theatre live music show, on product photography, for sports shots and also some reportage. It hasn’t missed a beat. The one area I haven’t used it yet is for wildlife, but considering that most of the wildlife we will be photographing will be slow moving (unless they’re chasing down a safarian for dinner, in which case I will switch to video) I foresee no issues with this subject matter.

A distinct advantage I will enjoy by using this camera is that of the In Body Image Stabilisation (IBIS). It’s quite extraordinary just how one is able to shoot with these cameras at very slow shutter speeds and still get sharp images. I have sat in my office and made 2 second long exposures that turned out sharp. Incredible tool that will come in very handy for sunset shots taken on the houseboat. I will also be using a small travel tripod, but more about that later.

I can’t believe I have owned this little game changer for 2 years in a couple of months time. It really has served me well and was the catalyst that prompted my decision to move away from DLSR’s and into mirrorless. Last year it did most of the work for me on the Namaqualand To Namibia feature safari of 2013. I love the simple controls and the image quality. I’ll be using this as the 2nd camera and will probably do most of my scenics with it.

I have two telephoto lenses that I will take with me on this safari. The lightweight Olympus 75-300mm will give me a nice long reach for the Carmine Bee Eater birds we will be making a special trip up the river to see. They are beautiful but very skittish, so we’ll probably have to shoot them from a fair distance. We did a bit of this on the Kavango River on our safari last year and we only managed to get close to them on the second day of trying. On the first day they just flew away when they saw us anchor too close.

Carmines sitting in the tree after we scared them off

I’m not really that into bird photography, but it will be a good lens to put through further field tests. I do hope that the 40-150mm f/2.8 PRO is available by September, because if it is then it will most likely replace this one or the other lens I’m planning on taking, namely…

…the four thirds Olympus 50-200mm f/2.8-3.5 which is considerably bigger and heavier than the 75-300mm. With the Olympus MMF2 adapter I will get full autofocus on the E-M1 with AF-C tracking if it’s needed. This lens has the equivalent field of view of a 100-400mm lens on 135 but the nice bright aperture of f/3.5 at full zoom will give me good separation on animals, plus of course the IBIS will work in my favour here too. It’s a wonderfully sharp lens, so I’m looking forward to using it on safari.

I’m also going to be taking the Olympus 75mm f/1.8 ED. That lens is the most amazing thing I have ever owned, so there’s no way it gets left behind. I’ll use it for night drives where we’re getting close to the animals. These shots made of the two male lions at Sabi Sabi last year show just how useful it is for low light work.

I’m in the convenient position of being able to choose between two great lenses for my general purpose photography. I can take the awesome Olympus 12-40mm f/2.8 PRO, which is sublime, or I can take the much smaller Panasonic 14-45mm kit lens that I used as my main lens on last year’s safari to Namibia. Looking back at the shots I took with this little gem of a kit lens last year I am seriously tempted to use it on the E-M5 again. It is excellent on that body. I’ll mostly be using this for general reportage and snapshots of our guests, so the weight savings over the 12-40/2.8 PRO could be the main consideration if I find the camera bag starts feeling a bit too heavy. It will be a hard decision, but I won’t be able to take both lenses. I’ll probably go with the PRO lens, but we’ll see.

Here’s another conundrum. I have the very good Olympus 9-18mm f/4-5.6 which also proved itself on safari last year, especially in the Dead Vlei, but I also have the >$2k Olympus 7-14mm f/4 Super High Grade four thirds lens that can also work with the MMF2 adapter. There’s a very big difference between 7mm and 9mm in m43 terms, so I’m going to have to think very carefully about this. The 4/3rds lens is as big as a Nikon 14-24/2.8, so if I do take it, it will use up a lot of the space in my bag. I’m hoping to stick with the ThinkTank Retrospective 7 for this trip, otherwise I will have to go with the somewhat roomier Lowepro Nova 200AW, which isn’t really suitable for micro four thirds gear - the dividers are too big. It’ll work well for the 4/3rds lenses, but not so much for the smaller ones. And of course there’s no pocket on the back that I can slip my MacBook Pro and iPad into.

Last year my little Samyang 7.5mm f/3.5 fisheye got used a lot. It’s a wonderful little optic and because it takes up so little room and gives such amazing images I will definitely take it with me again. Pepe began calling it “Bubbles” last year. Chicks obviously dig it. :-)

I'm going to take my little Velbon CF-435 carbon fibre travel tripod fitted with the Sunwayfoto FB-28 ballhead on this trip as well as my LEE Filters Seven5 system. Botswana gets some amazing sunsets, so the plan is for me to use these things for some scenic shots. I also will be trying out some time lapse photography and I have the perfect gadget to use for that - the Nero Trigger. This is a $200 very advanced camera trigger that I am busy reviewing. It has several modes and one of these is the intervalometer. My E-M1 has one of those built in, but I am going to put this to the test using the E-M5.

I have 40GB worth of SD cards but I am planning on doing more video this time around, so I might get a dedicated video SD card with a capacity of about 32GB.

My laptop is still the non-retina 13” MacBook Pro I bought early last year. It’s my main editing machine here at home so it has everything I need. I will need to get another 1TB portable back-up drive for it though. Probably another Western Digital. These goodies as well as my MacBook power supply and cables all go in a semi-hard shell Lowepro GPS case I found last year. It’s almost like they made it for the WD external drives, so it’s a great travelling companion.

Last year we were in the north-western part of Botswana in late September and it was extremely hot during the day so I didn’t want to be wearing anything too heavy. Mostly I had on T-shirts and shorts but the early morning boat rides on the river saw me freezing. I had to duck behind the other passengers’ seats just so I could get out of the wind chill. This time around I will take more appropriate apparel, like a windbreaker and some of those pants with the zip off legs. I’ll also look into some amphibious gear to use when we go to Victoria Falls at the end of our week in Botswana. I definitely won’t be doing any bungee jumping but if there’s a chance to go white water rafting on the Zambezi I will definitely be keen on that. Might have to consider getting a Nikon AW100 for it too. We’ll see.

This was me on the Kavango river last year. Technically this was in Namibia (Caprivi), but Botswana looks much the same.

All in all it’s going to be a fantastic safari and I am looking forward to meeting up with most of the folks who joined us in Sabi Sabi last year, as well as some new safarians. We have still got one suite that is available for 2 people to share on this one, so if you’re thinking about joining a safari, please get in touch and I will convince you to come on this one with us. It’s going to be great!