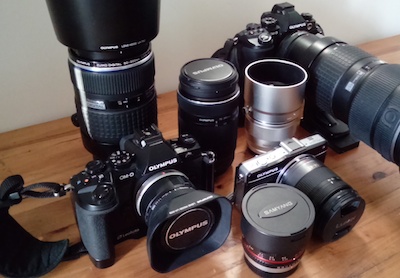 In our world some things stay the same while other things are constantly changing. One of the things that does both is my camera gear. As my regular readers will know I tend to change things up in my bag quite a bit, so each year that I have been on safari has seen me taking different things with me.

This year I am carrying a lot of the stuff I took last year, as well as one or two new items, which I have not yet decided on. Here’s the low down on what’s probably going in my safari bag this year:

I am taking 2 Olympus E-M1 bodies with me. One of them is mine, the other is borrowed from Olympus and will serve as a backup as well provide me with some alternative options for closer subjects.

The E-M1 has proved itself to be the most capable camera I have ever used. As you get more comfortable with its strange interface, you’ll find that you can change things on the fly quickly. It’s also a good test for your memory!

I recently sold my original E-M5, so for the first time in 4 years I won’t have it with me on safari. I will however, take my little PEN E-PM2 which is basically an E-M5 without the EVF and IBIS and with a much simpler interface. That will probably stay in my Lowepro Dashpoint 30 which I attach to my belt. Having a little camera like this handy at all times definitely helps with documentary shots, which I tend to do a lot of on safari. The lens I will use on it will probably be the Panasonic 14-45mm which has proven itself to be a very capable performer over the years (and was the lens I used most when I first got an OM-D E-M5).

Here’s my conundrum: I have recently acquired an Olympus 35-100mm f/2.0 SHG zoom lens, which is a massive beast of an optic but has just wonderful image quality. However, it’s very heavy at 1.8kg and it’s short on magnification compared to the 50-200mm f/2.8-3.5 I used on the last couple of safaris. I can’t take both of the lenses with me because of the weight restrictions, so its going to come down to which of them is going to be of more use.

The magnification issue of the 35-100mm can be resolved by getting an Olympus EC-20, which is a 2x teleconverter. All the reviews I have read suggest that this is a very good teleconverter and it will effectively give me a 140-400mm f/4 lens in 135 format terms, which is more than adequate. However, finding an EC-20 in South Africa is proving to be a somewhat difficult task. Nobody has one. This leaves eBay as an option so I could ask one of our returning safarians to bring one in for me (if they have the space for one more tiny little thing).

I’m going to have to think long and hard on this one because the TC is an expensive item. I can get the same reach and half a stop advantage from the 50-200mm lens, but it’s just not quite in the same league as far as sharpness and bokeh are concerned, so this is a point to pause on. I suppose I might be able to borrow a 40-150mm f/2.8 PRO and 1.4x TC which would render this whole debate moot.

The other long lens I have is the understated Olympus 75-300mm which is very useful for birds and other distant subjects in good light. It has a slow aperture of f/6.7 on the long end, but it’s a really good lens that takes up very little space, so it will be coming along with me to Botswana and Sabi Sabi.

Other lenses that will join me are the Samyang 7.5mm fisheye (“Bubbles” as it’s affectionately known), and my Olympus 75mm f/1.8. The 75mm has proved itself to be a wonderfully useful lens when encountering predator feeds at night that are lit by the trackers’ spotlights. What I do is put it on spot metering, open it up fully and I am guaranteed to get shots that are full of detail and generally wonderful. For wide angle stuff I will be using the very capable Olympus 9-18mm f/4-5.6. The Olympus 7-14mm f/2.8 PRO is out now, but there’s just something about it that doesn’t seem quite like an extreme wide angle to me, so it’s unlikely that I will ever get this particular lens.

As I have done in the past couple of years, I will take along my 2012 non-retina MacBook Pro running Lightroom CC to do my importing and quick edits with. I will have an external hard drive to run backups to at the point of import, a nice feature that Lightroom offers.

Last year I used the ThinkTank Retrospective 50 messenger bag which is more than adequate to hold everything. However, this year I will have a new lightweight backpack from Mindshift Gear that I have been fortunate enough to be chosen as a test user for. These are very comfortable backpacks that can accommodate all my gear and will also be easy to manage as carryon luggage in the planes. I can’t talk too much about them yet as they haven’t been officially announced, but I will be providing a review early next month, so look out for that.

I have a fantastic little travel tripod from Sunwayfoto that I will be taking with me (in my checked luggage) just for use when we do night photography in Sabi Sabi. The head is the FB-28 ballhead which I have used for a few years now. This really compact support system fits in everywhere and offers great support for the lightweight micro four thirds system. If you can’t find the Sunwayfoto in your local camera store, look them up on eBay. There are a few people who sell them on there.

And there you have it. My somewhat simplified safari gear solution. Compared to previous years when I was always stuck on weight and size, this year I will have less gear, but will remain just as ready for every photo opportunity as before. If you have any questions or suggestions to make, please pop them in the comments/replies section below.