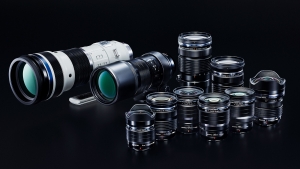 I recently went through a period of gear FOMO brought about by discussions that were taking place on a couple of real estate photography groups that are dominated by Canon and Sony users.

Basically the feeling expressed by the majority of participants on these groups is that if you aren’t using a 35mm sensor, you won’t be able to do architectural photography properly because you won’t be able to use tilt-shift lenses for other formats, such as APS-C, or in my case Micro Four Thirds.

The two most widely talked about lenses in these circles are the Canon 17mm and 24mm T/S. These are both incredible pieces of glass, but they are also fairly expensive. The reason why they are so highly sought after has less to do with keystone correction than it has to do with being able to shift perspective without having to move the position of a camera. So, for example, if you are in a room and you set up your camera for a one point perspective shot, but decide that you would like to see less of the ceiling and more of the floor, simply shifting the lens downwards instead of re-positioning the camera will allow you to keep the same one point perspective height but obtain more floor than ceiling in your frame. It’s a great way to adjust things in-camera rather than in post.

Sony A7 users are able to not only use the Canon EF lenses with an adapter, but some adapters made by Metabones will also provide you with full metering and auto focus support (down to eye-focus) on the whole Canon range of EF lenses. This means that you can get all the camera features of a Sony and the benefit of Canon’s best glass without really losing any functionality.

This discovery had me really thinking about whether I should add a 35mm mirrorless camera from either Sony or Canon and the 17mm TS to my arsenal for architectural work (an area I am most comfortable working in). The costs would have been justifiable, in fact I would be able to purchase an EOS RP body and the lens for about the same money as an Olympus E-M1X. Alternatively I could buy a new old stock Sony A7ii with a kit lens for less than the price of the Canon RP and if I wanted to, I could build up a collection of 35mm glass that could include the Sony Zeiss range too.

I had been thinking about doing this since midway through 2019. In fact, while on holiday in Cape Town last year I visited Orms camera store the day before Black Friday and got hands on with both Canon RP and Sony A7iii (they didn’t have the ii). The A7iii felt fantastic in hand compared to the RP, but it was quite a lot more expensive and they weren’t including the 28-70mm kit lens that the A7ii usually gets sold with.

A part of my brain that I have never truly understood when it comes to rationalising gear purchases began sending an urgent pulse pressing me to buy the thing anyway and worry about the financial impact later. After all, I would be able to make it up quickly in work that would surely pour through the door the moment the world learned that I had upgraded my camera. This other conservative part of my brain was telling me to stop fooling myself about parting with such a large sum of money for something that would simply serve as a gateway to much more expense in the form of lenses I would not be able to resist if I added this new system to my gear.

On the day the conservative brain won out and I breathlessly retreated back to my Airbnb to re-absorb our amazing view of Table Mountain (which tends to calm most people’s troubled minds). After returning from my Cape Town holiday to Durban I couldn’t get this potential system switch out of my mind and this wasn’t helped by commercial emails from suppliers landing in my inbox advising me of price drops on the Sony A7ii with the kit lens to levels that are mouth-wateringly tempting.

I watched video after video on YouTube about the A7ii and it’s hard to find anybody not happy with that camera, even though it is now about 6 years old. I thought about my own carefully crafted MFT system and forced myself to truthfully evaluate what it was that I found lacking that would prompt me to go in a different direction.

I thought long and hard about it and after doing a few more successful shoots in a variety of different fields, including real estate, product photography and (new to me) commercial lifestyle with real models and off camera flash in the field, I began to remember why I had moved across to MFT in the first place.

I have been using two E-M1 bodies with a variety of different lenses since my move from Nikon FX in 2014. One of these bodies has had to have its shutter replaced, a process that wasn’t particularly bothersome, even though the camera had to be sent to Portugal for the work to be done. When it came back about 3 weeks later it looked like a brand new camera because they replaced all the rubbers, as well as the entire top plate. Well worth the expense.

When I bring images into Lightroom from my Olympus E-M1 cameras I barely have to do anything to them before delivering to clients. I do have some presets that recover highlights and shadows and these days I can’t seem to stop myself from applying the dehaze filter by at least +10 on everything I shoot, but that’s really it as far as pixel massaging goes. I don’t ever sharpen and I don’t typically use noise reduction on client work either. Since my first jobs after moving to this system professionally (I have used MFT cameras personally since about 2011) I have not had a single client ever question the quality of my images. Not one. In fact I get compliments about my work all the time, even from other photographers.

When I look at the 8 lenses I am presently using, apart from the “mandatory”  tilt shift lenses that architectural photographers wax lyrical over, I have everything I need, from 7.5mm fisheye, all the way up to 280mm telephoto (560mm angle of view in 35mm terms). All of the lenses I use are exceptional performers and honestly I could not wish for anything more from them. I know that if I was to move back to 35mm I would have to spend a huge amount of money to get the same as what I currently have in lenses.

And what would I be gaining if I made that move? For sure, I would get better low light performance, shallower depth of field and maybe better AF-C, but how critical is that to what I do? Not very. A lot of the work I do actually requires more depth of field than can reliably be obtained by a 35mm system without engaging some trickery, such as focus stacking, especially in architectural and product photography. I would also have to carry much heavier equipment than is the case with my existing MFT system. Not to mention an entirely new camera support system with new tripods, heads and thicker Peak Design straps.

Despite the click bait fringe elements you will find online who predict the impending demise of the MFT system, there appears to be more development going on with it right now than there is in most other systems. There is quite literally something for everybody in MFT, be it smaller compact camera bodies like the Panasonic GM or Olympus PEN series, giant action cameras like the Olympus E-M1X, serious video and film making capabilities with the Panasonic GH5 and Black Magic Pocket Cinema 4K, alternative lighting that offers HSS and TTL from Godox, plus scores of different lenses from a variety of makers ranging from ultra wide to super telephoto to enormous fast apertures from Voigtlander. It’s pretty much a honey pot for gadget freaks like me, so why would I want to pigeonhole myself with another camera system that is nowhere near as versatile?

I’m sticking with Micro Four Thirds. It just makes a whole lot of sense in spite of that radical part of my brain that usually falls victim to the FOMO GAS.