10 Things I Love About The Olympus OM-D E-M1 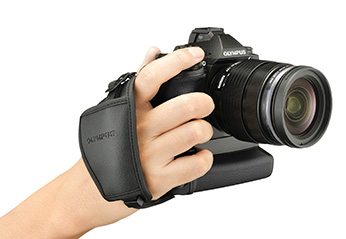 I’ve mentioned before that I dislike camera straps quite a lot. They always seem to get in my way or restrict me from positioning the camera where I want it. I used to loop the strap around my wrist but now I have begun using proper wrist straps. Not the kind that attach to your wrist, but the kind that simply allow you to slip your hand into the loop they form between the battery grip and the top of the camera. I find this much tidier. However, there are times when I do wish I had a neck strap so that if I am using two cameras I can sling the one not in use over my shoulder and not have to worry about it.

Recently I discovered that Olympus have already thought about this a bit and they have developed a grip strap (GS-5) that has a loop built into it that you can use to attach your camera strap too. So you can have the shoulder strap and the wrist strap attached to the camera at the same time. Nice little touch!

When using the E-M5 I have sometimes inadvertently moved the mode dial from A to something else without realising it. It doesn’t happen all the time, but it when it does it has caused me some confusion, especially when I think I am shifting aperture values using the command dial but in actual fact I am shifting the shutter speed. I know, one should observe all the indicators in the EVF, but hell, when I’m busy thinking about composition I don’t think about camera settings as much as I should. My bad.

So it’s great that on the E-M1 you now have the ability to lock the mode dial, even though it’s new position on the opposite side of the hump means it's less likely to get shifted inadvertently.

Because of the power hungry nature of having an EVF and Live View active all the time (not to mention IBIS), the OM-D cameras tend to offer fewer shots per charge than you’d get out of a DSLR. For professional use you need to have a lot of batteries on you, or at least make sure you have the grip. If you’re using the HLD-6 or HLD-7 battery grips for them you do get to prioritise which of the batteries the camera uses first. I have set mine to always use the one in the grip first and then when its exhausted move on to the one in the body. This allows me to remove the one in the grip and then go charge it without slowing down while the other one is being charged. I think of the one in the body as my “reserve” tank. After every shoot I do swap them around so that each unit is getting regular use.

Making HDR photos has now become a cinch with the E-M1. By simply pushing the HDR button on the top of the camera you get to chose between two in-camera HDR methods (standard and high contrast) where the E-M1 will create a single image from a burst of three different exposures, or a variety of bracketing methods ranging from 3 to 7 frames covering 2.0 or 3.0 EV. The E-M1 automatically switches itself into high speed FPS for these modes, so you will hardly notice its taken multiple frames if your exposures times are all relatively fast. The IBIS combined with the HDR modes allows you to get some very cool HDR shots that you would ordinarily have required a tripod for.

I’ve never done a time lapse movie before, but having seen many of them it’s something I really want to try. It’s made even easier now because the E-M1 does it all in camera. Simply go to the Time Lapse settings in the camera, set up the intervalometer and then use the Time Lapse Movie option to create the movie in the camera. I’m so going to do this soon! I just need to find some inspiration.

This is the coolest feature of the E-M1 in my opinion. You turn on the wifi settings, connect your smartphone or tablet to its wifi signal and in conjunction with the free Olympus OI.share app you have full control over the camera, including it’s live view which gets streamed to your device over the wifi connection. There are so many cool applications you could use this for, not least of which is to use it to shoot groups or selfies where you are in the shot too. However, something I am thinking of doing at my next event shoot is to put the camera on a monopod, hoist it high above a table with a wide angle lens on it and using the iPhone compose an image of the people sitting at that table. I’ve done this before without the remote, but it’s always guesswork when it comes to composing. I may have to attach the phone to the monopod too, but it’s worth a go.

Having a small camera that can shoot at 10 fps in the high speed mode setting is way cool. Having one that can shoot at 5 or 6 or 7 or 8 or even 9 fps in the same mode depending on your needs is even cooler. The E-M1 lets you set the FPS for both its High and Low burst settings. I like having that control.

Something I have never experienced first hand is the magic of seeing a print come to life in a darkroom. Some day I will, but for now Olympus have allowed me to use the Live setting when I am creating long Live Time or Live Bulb exposures and experience something similar. You actually get to see the image “developing” as you have the shutter open for long periods. Combine this with the wifi connection to your iPad and you’ve got a cool way of doing star trails or astrophotography. The system lets you chose how often you want the image on the screen to refresh too. Nice touch!

On the new range of PRO lenses from Olympus there is a new L-Fn button. This lets you program an available function into the button that you haven’t already programmed into the numerous function buttons on the E-M1 (or other OM-D). I have programmed it to use the 2x teleconverter function. This will be quite neat with the 40-150/2.8 and the 300/4. Basically it doubles their field of view electronically and creates an in-camera JPG interpolation at your full 16MP resolution.

This isn’t something that is unique to Olympus, Nikon have had it for quite a while, but it does add another very cool feature to the OM-D that a lot of other systems don’t have. If you have Olympus FL-600R or FL-300R flash units you can control these items remotely from the camera using the little clip on flash (or another FL-600R) as a commander. You can control 3 groups of lights, set whether you want them to fire in manual, TTL or A mode, adjust their output by up to 10 stops (you won’t find many lights from any manufacturer that allows such a big EV range to be set) and also whether they should fire in FP mode or not. That is pretty cool.

If you are an O-MD user what are your favourite features of your camera?